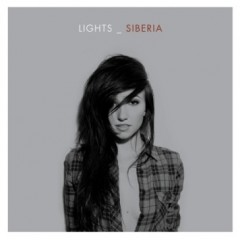 Most people like to get their Vanilla Rooibos on when it gets cold. Wrapped in the ever-comforts of a cozy bedroom, a warm-as-the-sun record makes for a satisfactory fireplace replacement. For atmospheric reasons, a dark and dreary soundtrack isn’t first choice for enjoying time under the sheets – that’s what a bad break-up and an auto-tuned Drake single is for. But, Toronto-based LIGHTS (born Valerie Poxleitner, go figure) and her sophomore Siberia is an icy affair; the spacey synthesizers and cool dubstep influence are making me chilly.

Like the title and the city suggests, Siberia dances in some snowy temperatures. Even her debut, The Listening, dipped into lower audio-degrees – heavy on the imitation U2 by way of CASIO keyboard (River), pillowy musings on decrepitude (Pretend), and bleep-bloopy winter imagery (Ice, February Air). It was a solid Owl City electropop meets adorkable pixie girl meets underground Toronto debut. Cook up a fire and pass on the Snuggie, because we’re letting LIGHTS take over the master bedroom, an account of Siberia being very, very good.

Lead single Toes sounds a little more The Listening than Siberia, but it’s an appropriate crossover between the stylistically different records. Perky electropads, a monosyllabic hook and additional production from Canadian electroband Holy Fuck makes a hit single. After the song’s three cheery three minutes, Toes’ duty is done – stuck in your head yet? The rest of the album dabbles with the so-current-it-hurts hipster dubstep movement. It’s not a bad thing because LIGHTS pulls it off pleasantly. The rousing chorus/dubstep drop on Where the Fence is Low is a solid standard of where the rest of Siberia goes: a breathy vocal atop deep, gravelly breakbeats. Fourth Dimension has the most aggressive drop, forcing everyone to hear the mighty LIGHTS and her musically diverse roar. A contrast to the beautifully hushed scenery and affecting vocal work of Cactus in the Valley (a wrenching ode to unchanging love; we see you Prodigal Son undertones!).

Techno sub-zero beats rumble and tumble all over the place, but it’s all a chaotic organization. Toss all LIGHTS’ new toys and ideas in, and you get a pretty accessible pop/dubstep album – sonically harder than Katy B, less operatic than, say, Britney Spears’ Hold It Against Me [MV] (GREAT track, don’t argue with me). Siberia isn’t your hot cocoa album, but it’s great enough for a second, third, fourth listening. We all need some more of that pleasant joy, and Miss Poxleitner revels in the technology, bringing to the table some well-thought out pop music growth.