Weeknd, The – House of Balloons 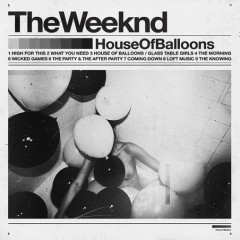 If underexposure is the key to success, there’s at least one act that proves the point. Mystery played a pivotal role in the critical and mass appeal of Toronto-based R&B phenomenon The Weeknd. When the woozy debut House of Ballons was released online (for free!), the blogosphere had no idea who possessed the whispery falsetto behind warbling sex beats. The vibe is dark, scary – a grim response to hip-hop’s post-heartbreak Drake sound. Compared to Abel Tesfaye, vocalist and real-life alter ego to The Weeknd, Mr. Aubry Graham is a soft ting. An almost blow to Toronto’s urban street cred, but Tesfaye is more than making up for the city – the kid is T.O.’s new muse.

There’s copious reference to the oppressively delicious allure of drugs, mixed in with some eerie lyrics. High for This tells the story of making sweet, drug-induced love with that alluring falsetto, while The Morning opens with the aftermath of aforementioned night, before diving into a very Drake-like chorus, (not a criticism, more an observation). Everything’s all grime and grit, especially in the troubled delivery of the atmospheric Wicked Games – heavy on the bass and content, The Weeknd isn’t the cookie cutter R&B star.

For now, it might just be the blogosphere, Toronto and certain sects of the hip-hop industry taking notice of The Weeknd’s talent, but he’s bound to blow up soon. Drake is featured on the second mixtape, and everything he touches turns to mainstream success – it’s only a matter of time before Lil Wayne or Kanye West zero in on this gold mine. But for now, Tesfaye’s cutting vocal and lyrical libido on House of Balloons should suffice.

Listen to it on Xiami.com or get it through the Weeknd’s website or Soundcloud.