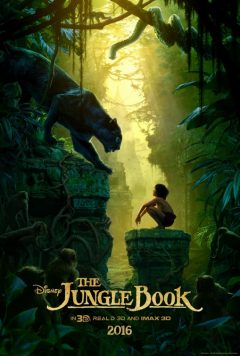 I haven’t seen many films from 2016 yet. However, I can say that the 2016 adaptation of The Jungle Book is my favorite so far: it’s even a far superior movie than the much-beloved Captain America: Civil War.

The second live-action attempt at recreating Rudyard Kipling’s collection of stories — the first one happened in 1994, directed by Stephen Sommers and starring Jason Scott Lee as Mowgli — takes us back to the jungle and follows young man-cub Mowgli (Sethi), who has been raised by the black panther Bagheera (Kingsley) and a pack of wolves, including Akela (Esposito) and Raksha (Nyong’o).

“You change your hunting ground for a few years, and everyone forgets how the Law works. Well, let me remind you. A man-cub becomes a man, and man is forbidden!”

Mowgli and the wolves live in harmony until they see their lives threatened by Bengal tiger Shere Kahn (Elba), who doesn’t welcome the man-cub. Following Kahn’s warning, Bagheera and the wolves decided that Mowgli should head back to the village where he was born for his own safety, but his journey takes a different path than the one his animal guardians expected to happen.

While I haven’t seen the film in 3D, Jon Favreau’s take on The Jungle Book is visually stunning, employing stellar use of computer-generated imagery with the jungle evoking visual effects similar to the landscapes seen in Avatar and Life Of Pi, making audiences submerge themselves into Mowgli’s world with ease and awe at how realistic the environments look, as well as being impressed with how the animals looked. Favreau’s vision and screenwriter Justin Marks’ storytelling is kind of similar to the 1967 Disney animated film, which is actually most people’s first entry into Kipling’s stories, and stays closer to the original source than the 1994 film did.

For a young kid, I have to give kudos to Neel Sethi, whose acting debut comes across as pretty impressive for a project that only features one human being in it for 99% of its running time — Mowgli’s father (Rajan) is seen in a brief flashback shortly after he stumbles upon Kaa (Johansson), the snake . Sethi’s reactions to the environment he is in feels natural to watch, but his interactions with the living creatures are what makes the film such a delight to watch. Speaking of them, the casting of voice actors here is excellent, especially for Ben Kingsley, Idris Elba and Bill Murray, the latter giving his voice to Baloo, the bear, in charming fashion. They all work well and support Sethi’s performance aptly.

I highly recommend anyone to watch this. There might not be much tension, except for when the intimidating Shere Kahn appears on screen, but it’s a great way for anyone to have a fun time in the theaters. Easily one of Jon Favreau’s best directed films alongside the first Iron Man film.