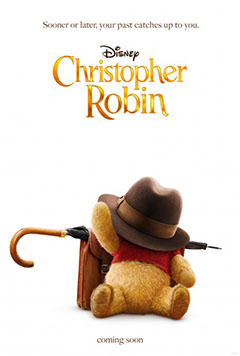 I’m a long-time Winnie the Pooh watcher. I teared up reading the book and imagining Christopher Robin saying goodbye to Pooh, though a similar thing happened to me when I read Peter Pan… and when I finished watching Toy Story 3. It happens a lot. But with the release of Disney’s Christopher Robin coinciding with the 50th anniversary of Winnie the Pooh and the Blustery Day, the 30th anniversary of the 1988 animated series, among many others— Disney really hit me with the feels in the first ten minutes; showing the painful parting of child and toy, as they embark on separate journeys… to almost never meet again.

All grown-up, with a family of his own and with the worries of work, Christopher Robin (McGregor) believes he’s had a mental breakdown when he gets a visit from Winnie the Pooh (voiced by the-ever-warmed-voiced Cummings), who has lost his friends from the Hundred Acre Wood. Following the steps of Spielberg’s Hook, Christopher Robin returns to the wondrous world to rediscover his inner child, and help him reconnect with his daughter, Madeline (Charmichael), and his wife Evelyn (Atwell).

While I was expecting a lot more gloom and despair from people’s early comments on the film, its most melancholic moments are at the beginning as they introduce the story of Christopher Robin’s growing-up and having to let go to audiences that may not be familiar with the books. The cold color palettes and score enhance the dire of death and war, and having to part from the ones you love the most— in that sense, it is most similar to Disney’s most recent Pete’s Dragon. It all works with the moment Pooh wakes up in the foggiest and windiest day at the Hundred Acre Wood all alone. Then Christopher Robin turns to mush and delivers all those warm and fuzzy feelings.

The story arc is, of course, predictable. We must learn to reconcile our growing-up while retaining our inner child and innocence. Enjoy things in life and appreciate others in the present. The screenplay makes it work here because McGregor’s Christopher Robin isn’t regressing to his child-self— though he does fight a Heffalump at some point; but instead we have Pooh & co. and Madeline all try to help Christopher Robin not get eaten by a Woozle for breakfast. Also, Eeyore is my favorite. Of course, why must we always sacrifice the donkey first?

The animation is pretty good. I wasn’t a big fan of the look at first, and it looks odd having a teddy bear interacting with honey— the adult in me popped up in that scene. But it eventually works. It best fits with both Piglet and Eeyore, but that might be probably due to less interactions with the real world.

I did enjoy the numerous nudges to the original The Many Adventures of Winnie the Pooh; I sang, I laughed, I teared up. I left the theater with a stupid grin on my face with another two adults; and we talked about feeling fuzzy for the next hour. This might be my favorite Disney live-action adaptation IP re-vamp, followed by Pete’s Dragon.