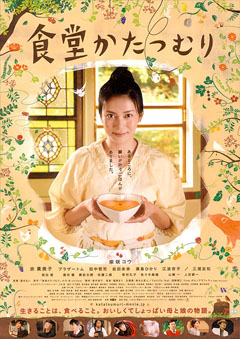 Directed by Mai Tominaga, who had previously directed the 2006 Wool 100%, Rinco’s Restaurant sports many of the visual elements in her debut feature.

The story based on the novel by Ito Ogawa, tells the story of a girl named Noriko (Shibasaki) who’s dreamed of opening her own restaurant since she was a kid, saving all the money she had until one day — there’s none. She decides to return to her hometown to live with her still-unwed mother Ruriko (Yo), an eccentric woman who has a pet-pig named Hermes.

Back home, she works hard to setup her own restaurant, which she names Snail Restaurant… because, well — she specializes in making “slow food.” The only catch? She takes only one table a day.

Rinco’s Restaurant is slowly-paced and puts a lot of emphasis on Noriko’s relation with the food she’s making, the setting from which she takes her ingredients, and the people surrounding her. When people eat the food she’s prepared, it’s like magic. They communicate with long-lost relatives, fall in love, and move on from dead spouses. The only person not “food in love” with Noriko and her cooking is her own mom, who seems to love pig Hermes the most.

The biggest challenge for leading lady Kou Shibasaki in her role was to emotionally engage us without talking. Her character loses her voice since the beginning of the movie, and we’re only allowed to listen to her talking when she’s a child, or when she’s talking to pig Hermes with her mind. Other forms of communication come through face and gestures, and some others through writing.

However, don’t be mistaken. Rinco’s Restaurant isn’t a film about food. It’s a film about human relations, in which the most important was Noriko’s relation with her mother. Kimiko Yo plays Ruriko to the most extreme of crazy. Like a little kid, Ruriko doesn’t want to eat what her daughter has prepared for lunch, and spends all day playing with Hermes. She wears loud makeup, with loud clothing. Much of their stories told through wacky animated sequences with bizarre songs that border that fine line of freaky and cute [check this alternate poster].