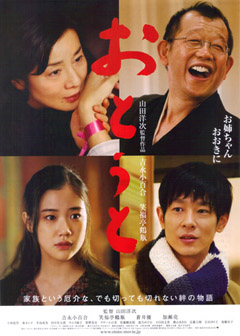 About Her Brother tells the story of the relationship between Ginko (Yoshinaga) and her little brother Tetsuro (Shofukutei), who shows up at his niece Koharu’s (Aoi) wedding to a promising young doctor. While the whole town laments Koharu marrying into an out-of-town family, Tetsuro manages to get pissed drunk at her wedding and embarrass the whole family.

Give it up for the amazing Tsurube Shofukutei, who manages to bring out all of his charisma into Tetsuro. Without Shofukutei’s masterful interpretation, his character could have fallen flat with its immature nature and shenanigans. Because as a viewer, we are Koharu: we are watching uncle Tetsuro being funny, being the life of the party, but it gets to a point where we can’t take it anymore. The things Tetsuro does, all left to be fixed by his older sister Ginko, it just makes us feel for her more.

However, Otouto takes a turn, and we go with it. It is a bittersweet family moment, and Yoji Yamada pulls it off. It’s not what is said on screen, but the gestures. The never-ending, never-faltering love of an older sister.