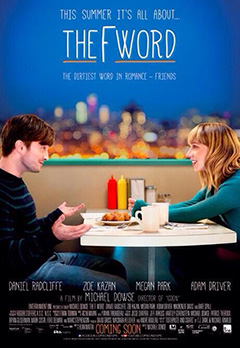 There have been romantic dramas, and comedies with romantic storylines — though, most movies do have a central love story — for the last couple of years (Crazy, Stupid, Love., Moonrise Kingdom, The Adjustment Bureau, Warm Bodies, About Time), but mainstream romantic comedies tapped out their North American potential circa 2011-2012 when New Year’s Eve (budget: $56M USD) hit the market, and like the market crash, deflated the genre. Since then, there hasn’t been an actual big budget straight-up romantic comedy, except for the indie ones… where Zoe Kazan is reigning supreme, picking up after Deschanel’s Manic Pixie Dream Girl moved to the small screen.

Will Kazan turn out to be this decade’s (indie) Meg Ryan then?

In this Canadian take on the indie rom-com at the hands of Goon director Dowse, The F Word (or in its more US-friendly title: What If), we get Kazan opposite Daniel Radcliffe as the quintessential quirky oddballs bantering about Elvis, poop and the Fool’s Gold Loaf [1], as Radcliffe plays Wallace, an ex-med student finally moving on from a not-so-recent break-up with Megan (Sarah Gadon in a small cameo) after he meets his roommate Allan’s (Driver) cousin, quite the whimsical animator Chantry (Kazan)- a match made in heaven!

The rom-com catch? Chantry is dating UN deal-broker Ben (Spall), and Wallace is stuck in the F-Zone. They promise to just be friends. Though The F Word isn’t as funny or entertaining as Dowse’s Goon — which really challenged my perception of Seann William Scott and hockey — this has its certain charm for lovers of the genre. It’s not as surprising as, let’s say, China’s Love Is Blind nor explores as much as India’s 2 States, but it challenges the notion that people should start relationships while overlapping their previous ending ones (to a slightly younger audience) and would’ve maybe been more interesting with even younger leads.

However, this lacked laughs or I just didn’t find the cute banter as adorable as I should have. There are only three instances when I laughed (and that I can actually name them is a problem): The first one during Wallace’s introduction to Chantry’s boyfriend and sister (Park), then when Wallace’s sister (Rooper in a small role) is giving her little brother a mouthful (kinda literally), and when Chantry hangs out with her sister at the beach… inflating their stomachs- which is something you don’t always get to watch on screen. Though I didn’t hate the movie (I did see it through without much time-checking), your mind kept on going back to Dan and Zoe just playing these characters without much range. I just feel bad because I do want to like them!

Anyway, Radcliffe has tons of other stuff — one of them being Horns — slated in the near-not-so-near-future, and you gotta go watch Kazan on this year’s In Your Eyes [Vimeo] and Ruby Sparks, if you haven’t already.