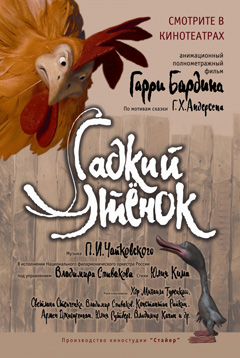 Animation has leaped forward in the past decade (or two). With the advancement of technology, we can say Hollywood has developed an animation industry. More animated features are being released worldwide than ever before; there are so many animated features at the theater that some people have to choose which animated film to watch. However, there’s a downside to that — animation has started to look very similar.

Animated films are reflecting our lives and are being made to be consumed by a generation that consumes pop culture by the bucket load, leaving us with animated features that are more contemporary and could feel more like an SNL skit instead. They’re seldom timeless, as you could either pinpoint the date of production of a film depending on the pop culture reference they use or the style/technology. Even great stop-motion can be placed on a timeline by its flawless technique. This is the reason why I found Garri Bardin’s adaptation of Hans Christian Ardersen’s The Ugly Duckling rather refreshing — just as its story, the animation is timeless. It feels as if it could have been made in the 70s, 80s as well as the 90s because it has  that style that a lot of Russian animation had. The mood and especially the texture of perfect imperfect stop-motion.

The story is simple — is there anyone in the world who’s not familiar with it??? — a baby swan (Stepchenko) is born to the wrong family and he’s ostracized for being different. I’m rather surprised Bardin managed to stretch the story into a 75-minute film that plays more like an opera/ballet performance rather than the straightforward narrative we’ve come to know from adaptations such as Walt Disney’s 1939 Silly Symphonies of the same story, which only lasted 9 minutes.

Bardin’s decision to focus on the dramatic aspect of the story — despite a lack of subtitles — with heightened theatrics makes Gadkiy Utyonok interesting to watch on its own, especially during the sequences that feature the Turetsky Choir Art Group chanting. It’s loud, striking and almost intimidating as the birds in the farmyard all gang up on the little featherless “ugly duckling” who is pushed around and mocked over and over, as he bursts into a super melancholic song.

And, because it’s Russian, it’s sad — sadder than the original The Ugly Duckling tale is — and it has unexpected tragedy. I actually gasped because I wasn’t expecting that turn of dramatic events. Overall, Gadkiy Utyonok takes me back to a time when I was watching Silly Symphonies as a child, when things seemed simpler yet held this emotional impact in my subconscious that stuck with me throughout the years.

You can watch some of Garri Bardin’s shorts on YouTube.