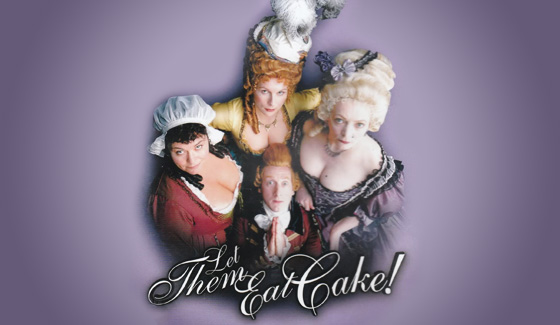 What do you get when you put comedy duo Dawn French and Jennifer Saunders right in the middle of the debauchery of the Palace of Versailles in 1782, acquaintances of l’Autrichienne (Marie Antoinette, played to hilarious heights by Elizabeth Berrington) and social-climber Madame de Plonge (Alison Steadman)? Let Them Eat Cake! That’s what you get! A six-episode “historical” parody with outrageous costumes and even more outrageous comedy.

Jennifer Saunders plays Colombine, the Comtesse de Vache, a pompous not-born aristocrat sitting at the top of the social ladder thanks to her amitié quite intime with Marie Antoinette, whom they first reference as “the Austrian tart the King married.” The sumptuous life at the Château de Versailles includes love affairs, social back-stabbing, murder, specially at the hand of Comtesse de Vache’s social arch-nemesis, Madame de Plonge who would “lie down with” anything to get what she wants. It’s as if… it’s as if Saunders’ Comtesse de Vache was the past life of Saunders’ Absolutely Fabulous‘ Eddy, however, with the added French background setting, Let Them Eat Cake seems to be ten times more hilarious.

Of course, you HAVE TO add Dawn French’s genius Lisette, Comtesse de Vache’s maid, who punches anyone in her way and seems to get to sleep with anyone she sets her eyes on, as well as the flamboyant Monsieur Bouffant (Adrian Scarborough), Comtesse de Vache’s fashion consultant, who finds it absurd when he exclaims, “Do I look heterosexual!?” The trio plot and counterattack all of Madame de Plonge’s plans to overthrow the Comtesse alongside her not-so-virginal daughter, Eveline de Plonge (Lucy Punch), who states, “Mama, you embarrass me. I wouldn’t know a penis if I sat on one!” in the very first episode, titled The Pox, to talking innocently about “fingering the leaves of my pressed flower album” in the fourth episode, titled Making Voopee.

The first episode is a funny introduction, but it’s really in the second, titled Murder, when I really gave my first big laugh as the trio headed over to the Marquise de Fufu’s place to clarify the Comtesse deVache’s lost bet only to find her chambers all bloodied. Trying to explain what they were witnessing, the women go on a ramble that included this jewel:

Lisette: She sinks into a bottomless well of pug-nosed, frigid, lesbionic despair… as you would.
Colombine: Grabs an axe, and chops herself into these, these fourteen… ish pieces.
Lisette: It’s the classic suicide scenario.

Alongside Murder, my other favorite episodes were Making Voopee, in which Comtesse de Vache suspects being pregnant with the King’s possible bastard son, and MY favorite, The Portrait, which has Lisette opening the curtains to the Comtesse de Vache’s chambers saying, “I hear the Marquis de Sade has escaped from prison again,” just to find the Comtesse strapped to her four-post bed with an apple in her mouth.

Overall, Let Them Eat Cake is short and the perfect three hours of your life if you only want to laugh to your heart’s content. And really, there’s none better to make you laugh than the Brits and their comedies. Dawn French has got some of the most notable quotable quotes, but it’s probably Saunders who takes the cake with two of her best line deliveries in the whole show with “Lunch! Everybody, lunch!” and “Shut the frock up!”