I first heard of Crowd Lu (盧廣仲, Lu Guangzhong) when he snatched Best Composer from under Jay Chou’s feet and was crowned Best New Artist (against commendable competition by Joanna Wang and Yoga Lin) at the Golden Melody Awards in 2009.

Unable to speak or understand any Mandarin, I delved into the vast ocean of unofficial YouTube uploads that once plagued the website and heard my first Crowd Lu song, 100 Ways of Living (100種生活) [MV].

I loved the quiet nature of what I’ve come to label as Happy Chinese music. Why Happy Chinese? It doesn’t matter how down you may be, you only need to listen to Crowd’s crooning of some of his most melancholic compositions paired with his unique geeky look to feel instantly better. “He makes me smile,” is one of the things I often hear from friends who like Crowd Lu as much as I do. And why wouldn’t you feel better? Besides writing relatable songs, he writes some of the most fun (almost nonsensical) songs to get you to dance with a Dragon Ball or a Spider-Man inspired dance like in Goodbye Hooks (再見勾勾).

However, what struck me the most — as the Spanish speaker that I am — was that Crowd Lu was using Spanish in his song. It may have been a regular “uno, dos, tres, cuatro” in I Love You (我愛你) [MV] — ten times better than Bono’s “uno, dos, tres, catorce” in Vertigo [MV] — but he continued with songs like ¿Qué te pasa? (¿Qué te pasa? 你在幹嘛?) [MV] only couting the ones on his debut, 100 Ways of Living (100種生活). I’ve been a fan since then. Four studio albums later with a geeky image that has changed very little throughout the years — the same up-beat personality, yet still, a slightly more mature melancholy. 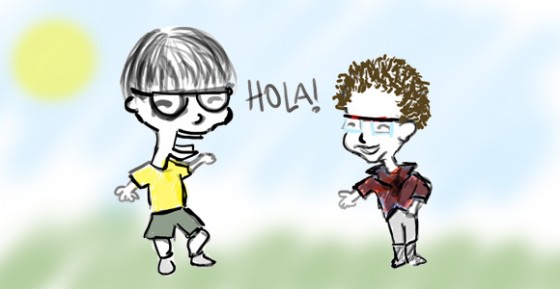 Crowd Lu took some time off his busy schedule before he leaves to do his military service to answer some of my questions.