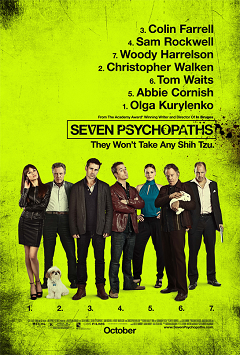 After an impressive feature debut with In Bruges, Martin McDonagh strikes again with another dark comedy in the form of the beautifully self-aware Seven Psychopaths.

McDonagh’s new film follows Marty (Farrell), an alcoholic screenwriter who can’t seem to figure out what to write next. His loyal friend Billy (Rockwell) constantly offers new ideas to fuel his script, from new psychopaths to a wild shootout finale. It isn’t until Billy and his partner-in-crime Hans (Walken), who kidnap and return dogs for money, inadvertently steal the shih tzu of an insane gangster (Harrelson), that the danger begins and Marty’s writing flourishes.

The marketing for Seven Psychopaths sets viewers up for a silly crime flick featuring some of their favorite stars, but those interested should be warned: this is by no means your typical crime or comedy film. It’s misleading, dialogue heavy, a little bloody, and a heck of a lot of fun. McDonagh’s dark sense of humor is ever-present in his second feature, as is the colorful language that made In Bruges the riveting f-bomb-filled movie that it was.

Fans of McDonagh’s work will be reminded of his Academy Award-winning short Six Shooter more than once while watching, as he draws a lot from his past works. The writing isn’t perfect, as there are more than a few predictable moments, but Seven Psychopaths keeps viewers laughing and at the edge of their seats. The film’s self-awareness is what causes some of the more predictable moments, as being meta can be fun, but often harmful. Movies with emphasis on writing are hard to pull off, but it’s the undeniable presence of great comedic writing that brings out the best in Seven Psychopaths. A prime example of the film’s humor is in the characters’ actual pacifism, dubbed psychotic. Some of them are still off their rockers, but nevertheless have qualities that seem fairly out of place.

Farrell’s reserved character dreams of making his script about psychopaths into something that inspires peace. Tom Waits’ seemingly unbalanced character carries around an adorable rabbit after a long murderous history, and Walken’s character approaches each situation with an almost surreal calm that results in a few far-fetched situations. Even Harrellson’s truly disturbed gangster has an enormous soft spot for his precious shih tzu, Bonny.

While Farrell, Harrellson, Waits, and Walken all deliver strong performances, Seven Psychopaths is ultimately Rockwell’s film. Rockwell, who could be declared one of the best character actors currently working, delivers an unhinged performance as Billy. Rarely does Rockwell get to be the focus of a film, always being pushed back into a supporting role. McDonagh shows us what Rockwell can do when that leash is off and Rockwell crafts a character who’s as deranged as he is loveable.

Seven Psychopaths isn’t for everyone, but those looking for something fun and out of the ordinary will find themselves having a great time with Rockwell and the rest of the cast.