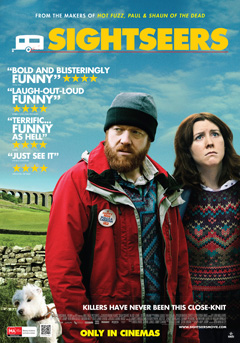 After a dense experience on horror with Kill List in 2011, English filmmaker Ben Wheatley exceeds the expectations with his new indecorous comedy Sightseers. The film skillfully mixes distinctive British humor, lurid crime, and an inviting weirdness, to depict an overwhelming love story stained by blood.

The adventure begins when Tina (Lowe) decides to leave her senile mother (Davies) alone for a whole week to go in a caravan trip with her boyfriend Chris (Oram). What seemed to be normal holidays with normal people soon turned out in a killing marathon with such naturalness and relaxation that I couldn’t cease being perplexed and having a loud laugh at the same time.

The characters slowly showed how dangerous they might be with their immature, capricious, and obsessive personality. And this way a new couple of freaks was born to stand side-by-side with other famous compulsive killers, such as Bonnie and Clyde, Mickey and Mallory from Oliver Stone’s Natural Born Killers, or the couple in Leonard Kastle’s The Honeymoon Killers.

The irreproachable performances by Alice Low and Steve Oram, who knew exactly what they had to do in order to convey all that bizarre madness to make the story work out were not by chance, since they also have written the screenplay (their first one for feature film) along with Amy Jump. They ended up being awarded by the British Independent Film Awards, and in Festivals such as Mar del Plata and the Catalonian International Film Festival.

Wheatley shot it beautifully, using unpolished images to depict tense moments, and composed frames for the leisurely ones, while the film shows destructiveness in every way. When Chris became friends of Martin (Glover), a lunatic guy he met in a caravan park, Tina didn’t waste time and arranged everything to break up that friendship. It is inevitable to think how desperately lonely these people are and how they feel such pleasure in destroying. But will they able to continue?

All the various ingredients were evenly assembled, contributing for the plot’s crescendo towards the staggering last moments, which expressed as much of cold cruelty as intense relief. The soundtrack was another factor that had great influence in the final impact, with The Power of Love by Frankie Goes To Hollywood giving a great emotional push when compared to the previous grim scenes.

Sightseers was able to spread tension throughout every scene, being visually and emotionally provocative, and representing one of the cleverest pitch-black comedies of recent years. It shall attract fans of both commercial and independent film, especially those with a noir sense of humor.