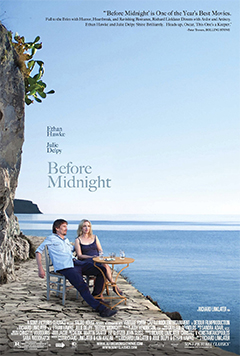 If there’s one thing that’s been crushed to death over the years, it’s the idea that love is a fairy tale with no problems whatsoever. Richard Linklater’s Before Sunrise brought up the idea that maybe that chance glance at a stranger could be love, but maybe spending one night with them is just enough. Then came Before Sunset, which left our two strangers to meet in Paris nine years after their first meeting. It’s a touch of hope for this idea of love at first sight, as the film closes with Celine saying, “Baby, you are gonna miss that plane,” and Jesse replying, “I know.” And now, there is Before Midnight.

There has always been a bittersweet touch to the way Richard Linklater presents this story of two strangers, and this time both the sweet and bitter are louder and clearer than ever. Nine years after the finale of Before Sunset, Jesse (Hawke) and Celine (Delpy) find themselves in Greece after a delightful summer vacation. Jesse’s teenage son just returned to America, while he stays behind with Celine and their two daughters. Their relationship seems comfortable and steady, up until they take a night off alone at a hotel paid for by close friends; a night that brings up every grievance and frustration from the last nine years that has been holed up inside.

Before Midnight makes us face the reality of romance. Can we really be happy when we drop and change everything we know just to be with them? After all these years, Jesse and Celine may have no interest in marriage, but their relationship mirrors a marriage all too well. They sit at a table with other couples, chatting about the nature of love and age, but neither ever brings up all the things that eat away at them regularly. The lasting nature of romance is brought up often and it’s nice to see a film take care to mention that it comes in all forms, be that falling asleep together on Skype in long distance or dealing with each other for over fifty years.

As the film progresses, it’s easy to take notice of all the little things that bother one or the other. The most telling sign that there are problems in their relationship is when the hotel clerk asks Jesse and Celine to sign the books he wrote loosely based on their meetings. Celine is tired of this fantasy he’s written, the same fantasy we once saw in Before Sunrise. She knows their relationship isn’t as perfect and dreamy as others make it out to be and she’s sick of it.

This isn’t to say that Before Midnight doesn’t still have some of that dreamy romantic quality. Linklater uses the same long takes his other films are known for to show the two enjoying Greece, be it in a car or strolling down the streets. That same intimacy that the previous two films retain comes into play here with the way he presents their story, and the characters are still as familiar as ever. There’s some playful fighting and some loving hand-holding, all of which serves to strengthen the blow of their fighting later on.

The disintegration of love isn’t something unfamiliar in film, as many will worry that this will quickly turn into Derek Cianfrance’s Blue Valentine while watching, but Linklater, Delpy, and Hawke all handle it with the utmost care. Both Delpy and Hawke give their strongest performances yet, making one believe they’ve actually spent all these years together. Celine has reached a breaking point and she can’t help but attack the man who she can barely stand to deal with. Jesse tries to defend himself but his playful attempts to fix the situation only serve to provoke her more. Their screenplay and acting is so intense and natural that it’s almost as though the visuals don’t matter, with each line punching the viewer just as hard as it hits the characters.

Where Before Sunrise gave us a dreamy look at the blossoming romance between two people, Before Midnight reinforces the love isn’t always perfect. It’s a bumpy road, sometimes desolate and in ruins, much like some of the scenery in Greece. Yet, what Richard Linklater, Julie Delpy, and Ethan Hawke all know is that even when the words “I’m not in love with you anymore” come into play, there’s always some hope left that love will last through the night.