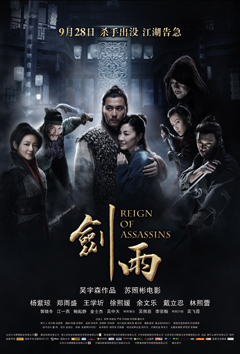 When I was told to watch Reign of Assassins because it was the greatest Wuxia film of the past few years, I asked myself what makes for a great martial arts film?

The film starts with the legend of the mummified remains of a monk that are said to have magical (healing) powers. It is then that the gang of the Dark Stone finds out that half of the monk’s remains are in the prime minister’s possession, so they are sent to retrieve the rests, and kill the PM and his son.

The Dark Stone gang is formed by The Magician (Dai), Lei Bin (Yue), and Drizzle (Lin), all led by Cao Feng (Wang), who manage to retrieve the half of the body. However, Drizzle takes the body by herself and meets Monk Wisdom (Li Zonghan) who tells her that her technique is faulty which could get her killed by a more masterful swordsman. After three months of training, the monk sacrifices himself in hopes to have Drizzle turning around from her past life.

Burdened by the blood in her past, Drizzle turns herself into Zeng Jing (Yeoh). However, the Dark Stone gang are still looking for her and the monk’s remains.

Though we are lead to believe that we are in for some mindless action, with slo-mo action sequence and all, Reign of Assassins is actually… a love story. The poster should be a blunt giveaway, I guess, but I’m still surprised at how different the film was to what I was expecting it to be. I think a lot of people would be really turned off with the switch from fighting sequences to having Ah-sheng (Jung) courting Zeng Jing. It all comes with a purpose, of course, but there’s a big chunk of the film of them trying to get each other’s attention.

What makes Reign of Assassins quite extraordinary, however, is baddie Cao Feng — joking aside. This is a bad guy that wants to use the remain’s magical powers not to achieve world domination, he just wants to be whole again. He is not evil, he doesn’t want power to take over the emperor in China like we would imagine, so when we hear his reason, it all comes off as a surprise… with a few uncomfortable laughs, but a surprise. He is merely a man.

The action sequences are good, and Michelle Yeoh is the most butt-kicking of them all. I just… I wanted her to win, of course, however baddie she was at the beginning. Nevertheless, when we finally know what’s really going on in the whole story, the ending seems… not fitting, not fitting AT ALL. It’s as if they just didn’t care about the implications of those revelations, and it all ends pretty happily ever after.