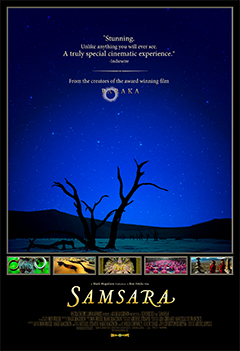 Ron Fricke is the kind of man who truly understands what moving pictures are all about. After captivating audiences with magnificent photography and perspectives on the world in films like Godfrey Reggio’s Koyaanisqatsi and his own Baraka, he now delivers another documentary that chooses to show instead of tell.

Few people use their camera to show us things as beautiful as what Fricke presents with the grandiose Samsara. Images as gorgeous as these, whether of people or nature, are usually accompanied by unfortunate narrations or long-winded discussions about how terrible the world is. Thankfully, the visuals here are only joined by entrancing music and ambient sounds.

While the majority of the film does not come across as manipulative, there are unfortunately some very preachy moments that get under ones skin, no matter how nicely shot. However, its exploration of themes like life, death, and rebirth through its visual grace even rivals that of last year’s The Tree of Life.

The idea of traveling the world through film and seeing sights we may never be able to experience on our own is taken to its maximum here. Every shot is as vibrant and colorful as one might experience up close, and that’s enough to make this film an interesting watch. No matter what one’s experiences are, they are sure to find something new here, proving that Fricke’s ambitious goals of capturing the wonders of the world are certainly ones that were achieved.

Of course, not all of the events and landscapes depicted in Samsara are perfect, as there were a few oddities and eccentricities of humanity that felt a little too awkward and staged to fit in.  Nevertheless, these scenes were still a sight to behold more often than not. The time lapse photography allows us to see many of these grand-scale wonders of our planet at all points of the day and night, while often also focusing on the most intimate and meticulous workings of millions of people, and the latter is something that may not appeal to everyone.

Samsara needs no dialogue nor story to move it along. As an almost purely visual experience, it really is a beautiful film and another impressive look at humanity and the world we inhabit.