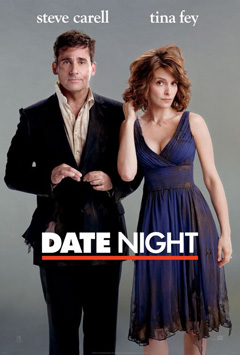 I’ll give you this, Klausner’s script for Shrek Forever After and Levy’s filmography — which includes Just Married, Cheaper by the Dozen, the Night at the Museum movies and 2011’s surprise Real Steel — don’t exactly make a match made in heaven, but I’ll watch about anything Tina Fey stars in. And while I’m a little more hesitant to watch Carell comedy, with characters like the ones he played on Dan in Real Life or Crazy, Stupid, Love., I’ve come to appreciate him a lot more.

In Date Night, Carell and Fey play a suburban New Jersey couple, Phil and Claire, going through a crisis: their best pals Brad and Haley (Ruffalo and Wiig) are splitting up, leaving them wondering whether their own marriage has taken a turn for the worse and if they had begun their spiral into marital boredom. Will they be next?

In the hopes of igniting the passion, Phil decides to take Claire into a trendy new restaurant downtown instead of their regular dining spot. All dressed up, the couple arrives to the busy restaurant without a reservation, but manage to sneak in pretending to be a no-show couple known as The Tripplehorns. Little did they know that crooked cops have been looking for the no-show couple, who are apparently dealing with the mob. After that, their romantic night out turns into a chase and a race against the clock.

Predictable and bland-looking, the best feature on Date Night is the chemistry between Carell and Fey. They are pretty darn funny as a married couple, and their own comedic knowledge aids the weakness in the script and technical aspects of the film. Though the rest of the supporting actors are underused — except for Wahlberg, who is competently used as a plot device — working a lot more like cameo appearances than supporting roles, the one and a half hour duration is palatable and quite chuckle-worthy thanks to the winning combo. Except for the taxi chase scene and the strip club scene, I did laugh hard at those. Especially when Carell and Fey dance, so real, it breaks that fiction wall and you can imagine any married couple you know in that situation. They ripped that Hollywood allure that the industry had placed into strip clubs, and they did the silliest thing they could have possibly done.

I’m uncertain on whether the Latino dub version should pass the PG-13 bar set for Date Night, or maybe I’m just a lot more sensitive to Spanish swearing, but as innocent as it sounds- Carell’s trying to find words to insult without insulting was also one of the bright spots of the movie, in contrast to Franco’s cameo appearance as Taste and Kunis as Whippit.

The crowd that seems to be the most pleased to watch this, that I’ve been able to notice, had been the +35 who generally have been married for a couple of years and can relate a lot easier to Phil and Claire. Though, Carell and Fey as leads seem to point more towards the 30-somethings and younger, which might explain why a lot of people found it dull and boring. Don’t be mistaken, though, Date Night is a long way from a horrible movie, and it’s thanks to those disheveled people on the poster right there.