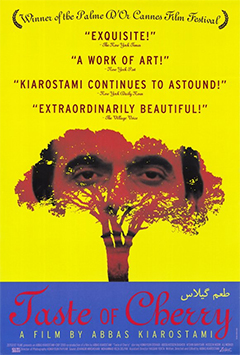 Opening off with what seems like a man in his truck cruising down the streets for more than just a man to work for him, Taste of Cherry takes its sweet time to set itself up. As the audience watches Mr. Badii (Ershadi) drive by every man and boy in town, one wonders what this well-paid job he’s offering entails.

After twenty five minutes of being under the assumption that this might get sexual, the audience learns that Mr. Badii is a desperate man contemplating suicide. The job he offers the young man is to call his name twice. If there is no answer, to throw twenty spadefuls of ground on him. If there is an answer, to help him out. Simple, but morally testing for any person told to bury a man who seems out of his mind.

Now this concept is an interesting one that presents a lot of room to explore the ethics of man. As Mr. Badii says, “20 spadefuls of earth. Just 20, each paid 10,000 tomans.” Being placed in a position where one would have to bury the man they just spoke to is something that would rattle any average person. He moves from person to person, hoping that he’ll find one willing enough to do this nearly inconceivable task for him.

Of the three men he manages to tell about his dilemma, each has an incredibly different reaction. The first is so terrified that he runs away from the car and the man offering the job. The second offers the traditional view on suicide that so many religious followers share. Nothing new and nothing that genuinely adds to the ethical discussion in play. It is with the last man, Mr. Bagheri, that we are finally introduced to an interesting catalyst in Taste of Cherry.

Alas, we don’t really get much of a reason to care about him. There’s barely any background to this man and that leaves us unattached and uninterested in Badii. Sure, he likes to talk about the state of Iran plenty, but he avoids talking about himself at all. Kiarostami may have wanted to leave out many details about this man’s life in an attempt to make him a blank slate for people to relate to, and that’s reasonable, but blank slates are frankly dull.

When characters are in the car, there are pretty much only two angles during back and forth conversation and absolutely no room for the camera to breathe. This simply adds to the film’s boring nature, as there’s nothing all that interesting to watch on screen. This isn’t to say that the angles are always trapped in the same claustrophobic setting, as there are plenty of nice moments shot from outside of the car, but when it’s trapped within, there’s nothing to see but earthy tones all around two faces.

Even though Kiarostami takes the audience on a mostly unengaging journey throughout Taste of Cherry, I find that the final fifteen minutes or so before it fades to black – and none of the very unnecessary and aggravating footage that comes after that – are some of its shining moments, with Ershadi showing more than just the same distant look on his face. It’s a shame that the rest of the film was so lacking.