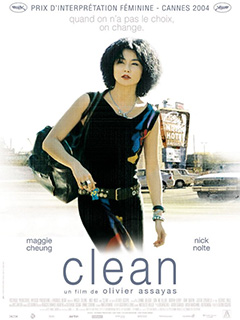 Clean opens with a series of hauntingly beautiful images of Hamilton’s industrial landscape and the foggy, fire-lit surrounding skies, whose metaphorical significance gradually comes into focus once the scene shifts to daytime. A former video jockey, Emily Wang (Cheung), arrives in the Canadian city from London with her companion, Lee (Johnston), a fading musician trying to get a deal done with a record label in order to continue his career. They also have plans to see their young son, Jay (Dennis), who’s living with Lee’s parents, Albrecht and Rosemary Hauser (Nolte and Henry, respectively), in Vancouver. Right from the start Emily appears to be a problematic soul—prideful and contemptuous, not to mention overbearing.

After arguing with an agent (McKellar) who exposes her for who she is, most notably a drug addict, Emily takes her anger out on Lee, later leaving the motel room to spend the night in the car, with her drugs.  She arrives next morning to find him dead, from an overdose of heroin she’d supplied him the night before.  After being arrested for possession, Emily ends up spending the next 6 months in jail, later finding out that almost everyone has turned against her, blaming her for Lee’s decline and eventually his death.  Her reason for living now becomes getting healthy enough, mentally and physically, in order to be with her son again.

In most other hands, Clean is likely just another struggling mother/son drama, with easily relatable characters and a conventional moral trajectory. However, with Olivier Assayas at the helm, it develops into something much more complex and layered, a vision of loneliness few are better at portraying. It also becomes a character study of someone whose problem is as much herself as it is drugs, or anything else for that matter. Assayas slowly but surely digs a hole through the walls Emily has built around her to find a mother longing for her son, and willing to sacrifice everything else in order to earn him. Meanwhile, the film neither romanticizes nor demonizes Emily’s addiction, as Assayas is too honorable a filmmaker, and Clean‘s focus isn’t anthropological.

At this point in his remarkable career, Assayas seems to have mastered the ability to provide the audience with just enough information about his characters and their lives for them to be able to fill in the blanks. His precise use of jump cuts, fades and dissolves also assist in rendering Emily’s struggles as she tries to become “clean” both unsentimental and unsensational.  She remains a functional human being like most addicts who wait until it’s too late to recognize the problem and deal with it.

Written by Assayas himself (with help from Malachy Martin and Sarah Perry), Clean is full of the kind of throwaway moments one rarely finds in films anymore, although that just happens to be one of Assayas’s specialties. Here, those moments are full of longing for another chance in a world that doesn’t offer many. In a number of respects, this is his latest chapter in exploring his key thematic motif of modern alienation. If he brilliantly employed Sonic Youth’s enigmatic score to help express it in his previous effort, demonlover (2002), here he expertly uses Brian Eno’s ambiance-laden tracks. A simple yet awe-inspiring sequence involves Emily walking downstairs to have a smoke during work. Set to Eno’s Spider and I [1], it perfectly captures her state of mind as she fights her demons.

Few filmmakers know and, more importantly, understand rock better than Assayas, and the film’s background allows him to dive into its inner workings and explore the various dynamics that exist in that world. This also enables him to address, through Emily’s behavior, the nostalgic elements calling for a bygone era full of sex and drugs. Yet, like demonlover, where Assayas didn’t chastise pornography, in Clean he both recognizes the pull and allure of drugs and the price one eventually has to pay. The film features on-and-off stage performances from the likes of Tricky [1], Toronto based indie rock band Metric [1] and Mazzy Star’s David Roback [1], adding further authenticity to the film’s milieu.

Working with ace DP Eric Gautier and his softly radiant look, Assayas smoothly follows his protagonist who remains constantly on the move. When an illness brings her in-laws to London, it opens up an opportunity for her. Albrecht, even with opposition from his wife, understands the motions of life, and when he gets a hold of Emily to talk to her about her son, he finds a woman humbled by her struggles.

Deserving winner of the Best Actress award at 2004 Cannes Film Festival, Cheung gives a brilliantly nuanced performance. Assayas reportedly wrote the film just for her, his ex-wife. The surprise, however, is Nolte, doing his best work in years. McKellar, Balibar (as Emily’s former employer/lover), and Dalle (a musician and Emily’s one true friend through the ordeal) also leave strong impressions.

By deliberately avoiding overt melodrama on every occasion, yet staying true to its emotions, the film turns its moments of both grief and bliss into something much more genuine and sincere.  When Emily eventually breaks down in tears, we’re also moved, but not just for the character, the actor, or the director, but also for a rare triumph of the art of storytelling in this day and age. Assayas moves us again with the next shot, as his camera slowly pans to the sky, now clear, which brings forth another image to mind. Kent Jones saw it first and mentioned the name of another redemptive story: Sansho the Bailiff (1954), adding, “History will bear me out.” I’m confident that it will.