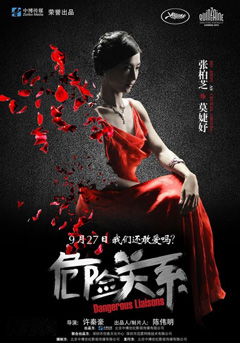 We all know the story since Choderlos de Laclos’ novel of the same name has been adapted onto the screen a number of times, given life by big names such as Glenn Close, Annette Bening, Catherine Deneuve, Lee Mi-sook… and yes, even Sarah Michelle Gellar. So when the announcement of a new adaptation set in 1930’s Shanghai starring Zhang Ziyi and Cecilia Cheung — back with a much needed interesting project after a colorful personal life that plagued gossip headlines for the past couple of years — what could possibly be more titillating?

For those who for some reason don’t know what the story is about, it follows a rich young man Xie Yifan (Jang, Valmont in the story) famous for his playboy tactics to bed any young woman just for the fun of it. He sets his eyes on a young widow who is the epitome of wholesome perfection, Du Fenyu (Zhang, Madame de Tourvel), all on a bet with the outstanding lady of society Mo Jieyu (Cheung, Merteuil), who’s out to get a young ingenue who’s crossed her path.

The South Korean director took the helm of the project, which posed interesting questions: would Hur Jin-ho’s 1930s Shanghai be the epitome of romanticized Shanghai that audiences in the West would be so accustomed to?? — see exotic Shanghai in Skyfall — Would we gloss over the historical happenings at the time? How the heck do we translate French debauchery to a Chinese cultural setting having to deal with censors? The answer to my last question is… despite dealing with sex and containing some scenes of gracious backside nudity, the dirty deeds and some of the most telling parts of the story are implied and lack the social payback that make the original story so much more satisfying.

This version of Dangerous Liaisons also gives widow Du Fenyu a background that allows the story to contain historical and slight political elements that give the movie its own flare, even seeming a lot more interesting than the adaptation itself, but that would detract from the interactions of our characters… especially from hardcore Liaisons fans. Though I’m not discontent with the casting, I felt disconnected from Jang Dong-gun’s bad boy version of Yifan, while his softer side fit him perfectly, and while Lee Byung-hun could have played the bad boy to perfection, I can’t picture him in the most emotionally charged scenes.

Though I’m not a very big fan of Zhang Ziyi, and the first half of the movie is filled with scenes of her being emotionally frightful for little reason, her performance picks up when she’s given the dramatic elements. I found it incredibly telling how much an order of homemade dumplings can mean for a relationship. My favorite character in all the story, however, has always been Merteuil, or in this case Ms. Mo. In here, they have softened her up, I think. She’s as manipulative as ever, and Cecilia Cheung has fun with it (but not as much fun as I would have wanted her to have). My favorite scene was near the end, when after being attacked Cheung laughs maniacally in Yifan’s mopey face, and she monologues her cold explanation.

However, the most perplexing change is the ending. Because there’s no letters exchanged or phone-listening, there’s no records of Yifan’s sexual exploits, so in the end, there’s no social payback for Ms. Mo’s dealings. There’s no fall from grace, but there’s an interesting final scene that changes all of her motivations. I would have liked the film to end there in the mirror and add that final scene with Zhang Ziyi after the main credits, I think, since both of them had little connection to each other.

As an afterthought, YES, the movie is pretty to look at, and I felt the music was overbearing, especially in one of Zhang Ziyi’s crying scenes — it definitely ruined that moment for me. But still… I would probably watch it again~ at least one more time.