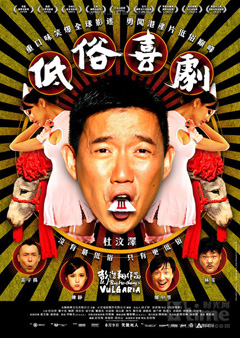 Labeled as a Category III sex comedy, Vulgaria was one of Hong Kong’s biggest hits this past year [1][2] — alongside Pang’s sequel Love in the Buff, follow-up to his smash romantic dramedy Love in a Puff — topping some of the week’s Box Office takes, where it gave a good run for its money to juggernauts like The Dark Knight Rises some days. Then, there were those mule scenes talks online, so missing this was a no-no.

Vulgaria lives up to its name the minute the company credits roll and there’s a warning telling you that if you’re overly sensitive and dislike crude humor, over the top offensive situations, sex and language… this is not the film for you. The story gets going at a film school, where they’re about to give a conference with movie producer To Wai-Cheung (To). To is an out-of-luck producer who tries to explain the actual job of a producer before, during and after the movie shoots, as he tells the students about the time he got involved with mainland Triads to get funding for his last film… a remake of the 70s erotic film, Confessions of a Concubine.

Having said that, watching Vulgaria felt like… watching a mild R-rated American film; subtitles-wise anyway. Content-wise, it’s quite similar to this year’s “vulgar” teddy bear, Ted, which was mind-bogglingly dubbed to Spanish as if it were little kid’s fare. Curiously, the scenes that made me laugh the most were the scenes that had less to do with sex and the crude jokes, like in the Mahjong den raid and the sexual harassment investigation… because punctuation is so damn funny in any language. However, as with any movie — especially comedies — a lot can be lost in translation. Though the subtitles were funny in their own way, I’m sure there are jokes and plays on words specifically set for Hong Kong people, just like the McDull series has its own “secret” charm for locals.

It also helps to know the Hong Kong movie industry to get the references and the cameos. For example, no one would bat an eye if they’d see Hiro Hayama without having watched 3D Sex and Zen. Despite all its tongue-in-cheek and irreverent humor, Vulgaria has some sort of a heart. Chapman To’s character is the epitome of the struggling movie-related person, the one who mortgages their home to fund their project, those who are often told to grow up and take responsibility, that their dreams are never going to happen.

Acting is fine, with the highlight of Ronald Cheng who plays the eccentric Mainland Triad boss — giving out a funny as heck curse in Hakka — and alongside Suet Lam has the hilarious task of giving a high class dinner to his possible film business partners. Vulgaria, however, shouldn’t be taken too seriously, it’s a light and quite low-budget film that’s the perfect fit for a good time… preferably with your guy pals. If you could say one thing about digital filmmaking it is that it gives crazy ideas like this the opportunities to make a profit.