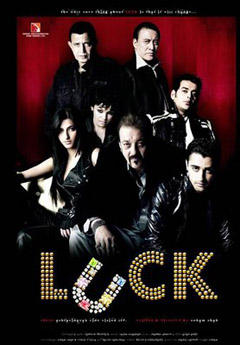 Luck is, as it title says, a movie about luck and what that can make you gain if used correctly.

Ram Mehra is a very unlucky guy. He doesn’t seem to get a break when it comes to his work or his personal life, always struck with bad luck in the aspects were he needs it. He is just a handsome young fellow, waiting for something to happen. In struts Karim Moussa with his silk clothes, a kingpin that deals with high end and deadly bets. He promises Ram a better life as long as he becomes a pawn of human Russian roulette.

Excuse me as I take a breath to prepare to tell the fail that is this movie.

It is predictable, amateurish in the way it was edited, mixing more than adequate actors with newcomers that seem to have Paris Hilton as their acting inspiration. It was a pure torture to spend two hours of my life watching this, but I can give credit were credit is due. There is no doubt that the plot had potential, if only the production had given a rat’s ass to make something out of it.

Alas, they made a movie where they wanted to pimp out beautiful young actors to the public, therefore this movie becomes nothing more than a bad actor introduction.