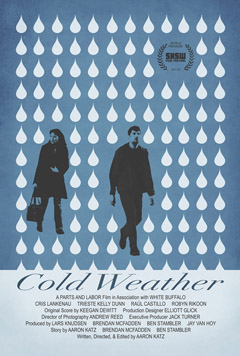 I have a few things to admit before talking about Cold Weather.

First, I was interested in the film because of that poster [1], which made me think I was in for a drama about hipster blue. It’s in part my own fault. I went into it blindly without having actually read the synopsis. However, I have encountered opinions of people who went in knowing this wasn’t a drama. So I’m on the fence whether or not you should know anything about it before watching it.

Is Cold Weather the first film of its genre? A hipster mystery? Is there such a genre? Will it become a trend? Will it be perfected?

The film follows drop-out forensic student Doug (Lankenau) who’s recently split with his now ex-girlfriend Rachel (Rikoon). Without a job, Doug moves in with his sister Gail (Dunn), and seems to be living a pretty meaningless existence until he gets a job at the ice-packing factory where he meets Carlos (Castillo), a part-time DJ who coaxes Doug into a mystery of his own after Rachel goes missing.

For the first 30 or 40 minutes of the film, I really thought I was watching a slow sibling drama, in which Doug is trying to somehow re-connect with his sister. And in essence, Cold Weather does seem to be about the relationship between these two. At first, it’s hard for us to imagine why Doug’s sister would be so permissible with him. After all, Doug is a drop-out with nothing better to do than pick his sister up in the middle of the day while she’s at work to suggest she drop what she’s doing at the moment to go whale watching.

Even when Doug takes the job at the ice-packing factory, he seems to just be going with the current. His sister (and his family) doesn’t want him to sit idle. When he meets Carlos, he seems to have more passion than Doug. This point is discussed when Doug seems surprised Carlos DJs. Carlos points out that he doubts Doug would be a professional ice-packer. When Doug reveals he was studying forensic science, saying he wanted to be like Sherlock Holmes — let’s not even begin with the implications of that dream.

When Doug meets up with his ex and she tells him how marvelous it is working at a successful law firm, he starts to feel like he’s doing nothing. However, things turn around when we find out that Rachel isn’t really telling the truth. That’s when the mystery and supposed thrilling part begins. Except we’re not really thrilled and we care too little about Rachel to actually care what happens to her.

The whole situation lends itself to some bonding time with Doug and Gail, however. Even if her life seems all settled, Doug points out she doesn’t have any friends or any social interactions, which is why their bond over the mystery makes sense. Gail has nothing better to do!