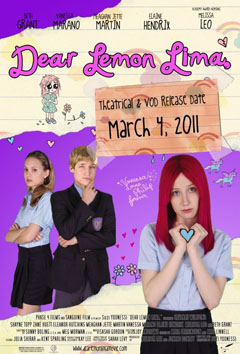 I want you to ditch any misconception of the poster that makes this movie look like it’s a romantic comedy for early teen girls. It’s really not. Sure it starts with a girl named Vanessa (Wiltfonf) trying to get her “no longer a nerd” ex-boyfriend Philip (Topp) to take her back after his fancy trip to France and his ditching his glasses and his hippie values.

In short, Philip is an insufferable not know. But Vanessa is madly attached to him, something her single mom Terri (Hutchins) doesn’t get — Philip is not even that hot.

Vanessa attends Nichols High School in Alaska, a private school that prides itself for its links to Native Alaskan roots. This includes — besides interpretative dances and an annual Snowstorm Survivor competition — a scholarship given to a Native student, handed to Vanessa because she is part Native. However, she doesn’t necessarily agree with that.

Being outcast at school for not being Native enough for her Native loving Caucasian classmates, as well as sucking at any Native sport, Vanessa is labeled a F.U.B.A.R (Effed Up Beyond All Recognition), a title given to another group of weird kids like the awkward Samantha (Marano), the bizarre Nothing Amigone (Lee — LOL!), the Chin sisters (Finlon & Morrison — that was pretty amazing casting), and the overprotected Hercules (Huett), who’s mother, Mrs. Howard (Leo), drives us to a point of no return.

Though Dear Lemon Lima is a teen romantic comedy on the outside, it turns into a story about friendship and positiveness in the presence of tragedy and bad energy. Wiltfonf goes through her naive “I want to be blond” phase to get Philip back, passing through her emo devil red “I hate you” phase all the way to being just herself. Everything silly that her character does is, in essence, what a teenage girl does, until she finds  and connects with this odd group of people.

In contrast with what the school is supposed to stand for, all these rich kids — supposedly minority loving — cast out this group of people for being different. However, these guys don’t let that get them down. Especially Nothing Amigone — gosh, I love to say that name — who stands up when it mattered the most to knock some sense into our protagonist.

One of its biggest shortcomings is that the change in character for Megan (Martin) came completely out of left field, while making Philip even more of a jerk than he was at the beginning. The film also lags at times, especially when Vanessa is mopping about Philip… but I guess it’s understandable.

Overall, Dear Lemon Lima might not be a manly choice of film — though, my dad did enjoy the film quite a bit — but it’s definitely one for young women who are tired of having to watch films about lovesick girls.