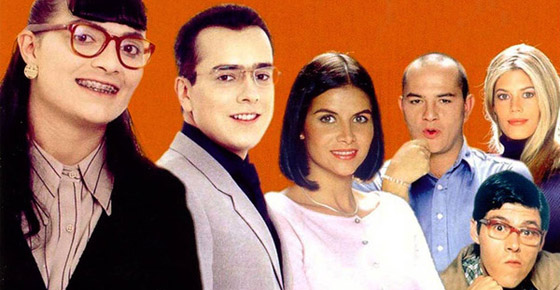 There is no other way around it. Yo Soy Betty, La Fea (I am Betty, the ugly one) is one of the most hugely successful telenovelas of the past 15 years. It became a huge hit across Latin America when it aired between 1999 and 2001 — it’s hard to believe that it’s been ten years since it finished its first run — with 169 one-hour high rating episodes, and spawning a huge number of international re-adaptations including the American version with America Ferrera, Ugly Betty, and even a version in Mainland China called Ugly Wudi (丑女无敌).

In it, actress Ana Maria Orozco plays Beatriz Aurora Pinzon Solano — don’t you love Latin American names? — also known as Betty, a highly prepared Economics graduate who settles for a job as a secretary because she always loses jobs to less prepared but prettier people. And look at her, with those bangs, the outdated glasses, the smile with braces, the poorly tailored clothing… add to that, face twitches when she laughs — like blinking with just one eye — and the over the top laugh, Orozco gives herself to the part and that is what ultimately makes the show what it is.

She gets infatuated, and finally falls in love, with EcoModa’s boss — pretty boy and ladies’ man — Armando Mendoza Saenz (Jorge Enrique Abello), as she goes against what people think of her and proves to be a valuable asset to her boss and company.

There are a lot of good things about Yo Soy Betty, La Fea that work, like its humor. The show and Orozco put a lot of effort into making Betty a shocking view… not really “ugly” but more of the archetype of what we’ve come to know as a nerd in American media. Betty, and her also “ugly” friend Mario (Ricardo Velez), are socially awkward with an off sense of humor, particular ways of reaction and no sense of style.

The characters as a whole are a bit cartoonish, but it comes with the telenovela territory. However, after years of its release, the show’s humor still feels fresh and sharp, despite how the style has aged. The only downside to the premise is that, yes — it is kind of a shallow telenovela. The ultimate goal of the show is to have the protagonist, who ends up not being ugly once she fixes those style problems, but still is her good old self, ultimately ending up with the male lead.

Ugly Betty, in that sense, ends up being much more complex despite getting lost in its own odd turns into over the top drama, comedy and telenovela-like plots packaged as an American-style sitcom.