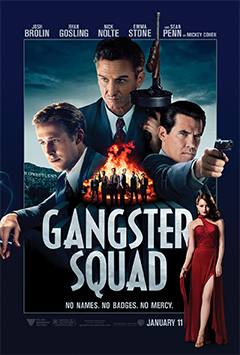 With a debut as strong as Zombieland, you’d think Ruben Fleischer would be off to a great career in comedy, but that glory was short lived when the terrible 30 Minutes or Less arrived. Now with Gangster Squad, he tries his hand at crime and drama, and boy does he try way too hard.

In late forties Los Angeles, Mickey Cohen (Penn) has taken over with his gang and controls the streets. Officer John O’Mara (Brolin) wants to take Cohen down, but can’t do anything until his superior Bill Parker (Nolte) gives him the “go” to put together a team to take him down outside the law.

The group, not so subtly named the Gangster Squad, consists of Brolin as the leader, Gosling as the pretty boy, Patrick as the wise old gunman, Ribisi as the smart tech guy, and Mackie and Peña as the token Hispanic and black men. If you can guess which members of the group get the least screen time and dialogue, you win a cookie. As for the ladies, there’s only Enos’ wholesome wife and the sexy mobster girlfriend played by Stone, who falls for the pretty boy almost instantaneously. Every one of these actors does a fine job in the ridiculously underdeveloped roles they’re given, but the problem here isn’t the acting, it’s the writing.

Will Beal’s screenplay is frankly a mess, and at almost two hours, it drags like hell, never quite getting the right pace. On one hand it tries desperately to be a violent and action-packed gangster flick, but also a dark comedy. The problem with this is that almost all the violence in Gangster Squad is sort of hidden away, sheltering the audience like a bunch of babies. As for the comedy, one ends up laughing more at how ridiculous things are than any of the actual humor put into the script.

The screenplay isn’t the only messy thing, though. Some of the sets feel straight out of the wrong decade, fairly similar to some from Chinatown and drowning in grey tones, while others are absolutely gorgeous with rich and brilliant hues like one of the main clubs, for example. There’s actually one short tracking shot through the club that feels inspired by Boogie Nights that’s quite nice, but was cut off far sooner than it should have been.

For all of Fleischer’s decent work, there’s much more terrible work than good, and the weakest aspect Gangster Squad has to offer is its action scenes. Whoever thought it’d be a great idea to use slow motion in what many would refer to as Zack Snyder’s style was an absolute idiot. It’s boring, drawn out, and there isn’t anything compelling that brings forth these sequences. Sure, it might look pretty to some people, but if there’s nothing actually going on, who cares?

Gangster Squad could have been a solid crime film to start off the year with, but despite having a great cast who try hard to do what they can with their roles, it flounders into a try-too-hard mess that has barely any redeeming qualities.