John Ajvide Lindqvist – Let the Right One In/Let Me In 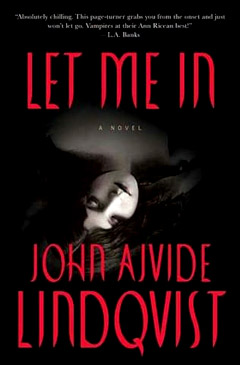 A bullied 12-year-old named Oskar dreams of revenge, but ends up finding love with a girl named Eli, who gives him the strength to hit back. But Eli is a bit peculiar — she doesn’t come out to play in the day, she never eats, and always needs an invitation to enter a room.

Let the Right One In (or Let Me In, according to the American translation by Ebba Segerber) is an intense vampire fiction tale that mixes so well with the tale of a boy in a 1981’s small Swedish city that it will probably chill you to the bone.

The book, unlike the film, takes twists and turns in a labyrinth of back-story dealing with things such as drugs, xenophobia, castration and pedophilia, which result in a strange blend that is really great, but dragging at times. At the beginning, it felt like the author didn’t know where to go with all the information. But there’s a point in which he begins focusing on the story between Oskar, Eli and Håkan, which I believe was the most fascinating, as were the parts dealing with Virginia’s thoughts and ultimate ending.

As to the difference between the film adaptation and this? Perhaps the book is a lot scarier than the film, and it’s partly because it takes you to where the film didn’t… dealing with Håkan. However, the most heartfelt moments are there, anything with Oskar and Eli discussing their lives.