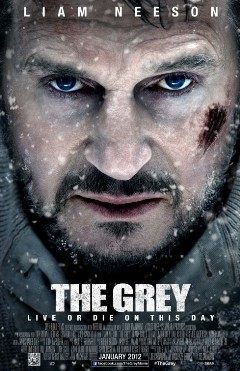 Liam Neeson teams up with Joe Carnahan, Ridley Scott and Tony Scott again to work together in The Grey, a survival thriller based on Ian MacKenzie Jeffers’s short story, Ghost Walker.

The Grey follows an oil drilling team who are stranded in Alaska after surviving a plane crash. The survivors are forced to endure the cold with what little resources they have left.

As if enduring the cold (and each other as time passes by) wasn’t bad enough, wolves are involved too, which makes survival much harder than it should be for the oil men.

Will they survive or not?

The Grey is all about Liam Neeson’s character, John Ottway. A day before the plane crash, a depressed Ottway writes a letter to his wife Ana (Anne Openshaw) that he plans to commit suicide. He changes his mind about it, only to be rewarded with a plane crash that makes him cling on to life with the few survivors left from the wreckage. Given his experience in life and work, Ottway finds a new purpose in life and takes it upon himself to take care of his fellow survivors and lead them into finding resources for survival against nature.

Liam Neeson’s performance is subtle yet engaging enough to carry the entire film and his co-stars, who weren’t as well-developed as his character was. The Grey had some good dialogue scenes between Ottway and the good-hearted Hendrick (Roberts) as well as the interactions with Delmot Muroney’s character, the faithful Talget, who deserved more lines. On the other hand, Frank Grillo as Diaz adds some extra tension to the film as his character questions Ottway’s decisions for survival. The other three survivors weren’t as noticeable as the others.

Joe Carnahan, the film’s director, did a good job in streching out of his comfort zone while effectively putting the survivors through tense, suspenseful, and even emotional/philosophical moments. But he still had a few problems in making the film. While the wolves were well used to create suspense, I wished that the CGI used on them was done better. They weren’t as ridiculously huge as the ones seen on The Twilight Saga: New Moon by any means, but they still looked a bit bigger than real-life wolves would. And there were also some logic-defying moments here and there regarding survival, but I could manage to overlook them thanks to the film being quite gripping in its landscape.

While the film is similar to 1997’s The Edge in premise, The Grey manages to stand out on its own as a good film thanks to Liam Neeson’s performance, who keeps the film engaging to watch, for the most part, and preventing it from being just a mere survival film.

P.S.: There’s an extra scene after the credits.