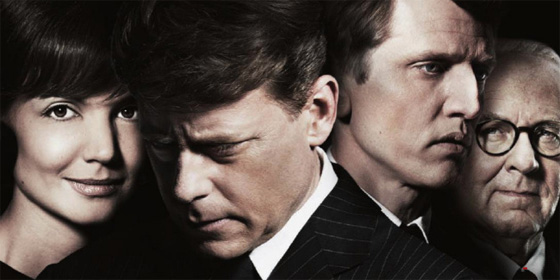 Every political tale’s got its dirty secrets, and I guess that is what makes most political figures interesting.

I am not American and haven’t read enough about the Kennedys to be able to judge whether or not the things depicted in this mini-series are true or not. What I know is that it’s statistically impossible for JFK to have been the saint that I’ve been told he was. Having said that, The Kennedys presented itself as a History Channel project that was later broadcast — after its first episode — by ReelzChannel, so many are left wondering whether to believe this is a good biographical mini-series or not.

In the 8-episode mini-series, Greg Kinnear plays John F. Kennedy in most of his adult life, while Canadian actor John White plays Young John, as being quite easily manipulated by his father’s — a quite brilliant Tom Wilkinson — trumped life successes. The beginning of the story makes it seem like destiny pushed John to follow a path that otherwise he wouldn’t have chosen.

Dad Joe Kennedy, Sr. wanted to reach for the stars, but never could. He wanted to push his older son Joe Kennedy, Jr., only to lose him… and then pushing John to reach for the stars he could never reach. It’s rather sad and understandable for many in the American public to dismiss this as exaggerated and untrue. But you know, it could be — after all, history is not set in stone. Historians learn and history is rewritten.

The main problem with The Kennedys is that it’s boring. The production of the series is fine. The cast looks the part, and the acting isn’t bad, so the problem resides in the script and direction.

I know politics are dirty, history is dirty, so seeing these things happening here is not shocking. It seems that when the project was being put together, they didn’t know whether to do an historic and educational series or if they wanted to dramatize it enough to make it interesting for an audience. One of them you watch at school as part of your school program, the other you watch at home because you will see something else that you won’t be able to see in those education programs.

Also, has it really been 50 years since then? Gosh~