The Fourth Seasons: Being Human UK and Fringe

All of these characters are so well-portrayed and more or less well-defined that it’s a shame when scale and plot miscalculations shortchange these characters. How strangely fitting is an ill-conceived loss of agency on shows focused on free will? Both shows are far from perfect, but Being Human’s character dynamics anchored my interest through an overall plot of which I wasn’t too fond. Fringe’s drastic twists were surprising in an entertaining manner until they gave off the scent of characters being shoved through a plotline. 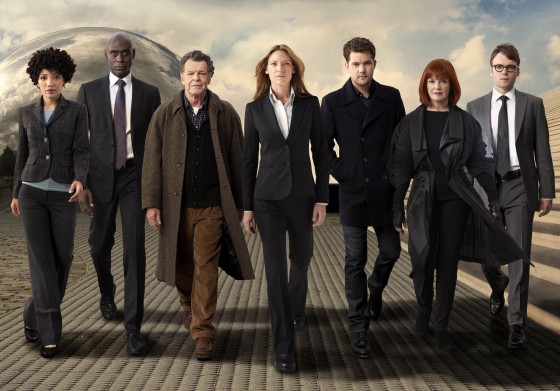 “Do you know what you just said?” Olivia asks one woman who had just volunteered for scientific testing. One of the aspects of Fringe that I admire the most is that they give time to examine aftermath. In that moment of dialogue, Olivia wanted to double-check the woman’s willingness because Olivia was forced through testing as a child. It was a brilliant throwaway line, followed too soon by machinations that push her around like a pawn in the finale’s overdone chess analogy. For every moment in the latter half of the season that beautifully explores consequences, the next episode drops the subject in the race towards a conclusion that felt inert and anticlimactic.

“It’s a feeling more akin to having been born in captivity. A seeping realisation that your dreams and ambitions are just too big, too rich for this domestic world.”

So begins “Making History,” the seventh episode of Being Human’s fourth series, which will probably remain one of the best episodes of television I will watch this year. Take note of the especially precise lines in this episode — for example, watch for when the word “God” is mentioned, for it reveals much about one relationship in particular. What chilled me most is how much I ended up wanting a villain to succeed at making history in some way, in any way, except for the way that ends with vampire’s takeover. He wanted to find his abilities and make them matter, a desire that may resonate with many in these frustrating times.

Both Being Human and Fringe center on characters who must overcome doubts and horrors of past, present, and future in order to not only find their power, but change the world. Viewers of these shows want to venture past the confines of mundane stories, seeking fiction where humanity trudges onward through uncommon but relatable circumstances. Even with major changes, Being Human stuck to its titular theme, and I eagerly await series five. For Fringe, I give credit to the show runners for attempts at experimentation, but I hope that its fifth and final season isn’t too much of a disappointment.