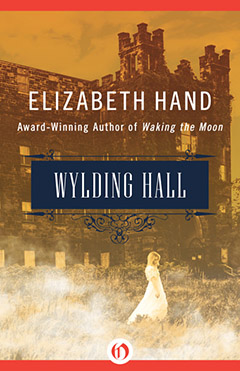 Windhollow Faire, an acid-folk group recovering from the suicide of their lead singer, spends the summer of 1972 at an old English estate called Wylding Hall. Their stay will produce both a timeless album and an eerie, enduring mystery.

Elizabeth Hand tells this story through modern-day interviews with the surviving members of Windhollow Faire, as well as others involved with the band at the time. Their recollections are rendered in effective but somewhat basic dialogue-prose, and the first half of this short novel could get tiring with oft-repeated reminders that there was no internet and social media forty years ago. Yet the characters become engaging and distinct voices, and Hand uses perfect judgment in deciding the best length of each character’s response to convey after-the-fact suspense.

Wylding Hall itself is a fascinating setting that readers will enjoy exploring, a crumbling but elegant stage for the gradual intrusion of supernatural elements. While the characters may have differing theories and doubts about what happened, the novel eventually enters the tradition of English horror, oddly befitting the band’s revival of folk music past. The bones of this ghost story are familiar, but the summer world that Hand fashions gives the work unique identity– a time imperfectly preserved by memory, audio recording, and photograph.

Wylding Hall can be found in ebook format via Open Road Media.