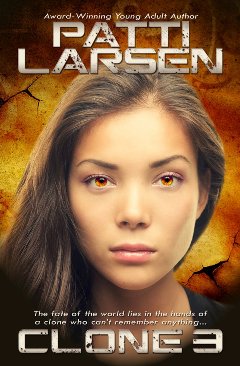 I have always had a good eye for Sci-fi novels. While the list is somewhat short compared to my romance selection, this genre has produced some of the most heart-racing reads of my life.  What intrigues me about this genre is that it takes our world and flips it around with “what ifs.” Many possibilities, from aliens to the world ending, have fascinated me for many years. However, for me, it’s hard to find really great sci-fi in Young Adult books. That is why for this rare moment I’m excited to bring a review for Clone 3.

In a post-apocalyptic world, we are introduced to Clone 3, a young girl of sixteen, waking in a room, battered and decaying. She has no knowledge of who she is or where she came from. All she knows is the woman in a holographic message might be her mother, and this is only based on a feeling she has.

With the message that she has an important mission for humanity, she is left with nothing but the clothes on her back.  There is a door hanging on its hinges in the darkness, but Clone 3 moves forward into a hallway.  Finding her way out of what we find out is a school, Clone 3 runs into the Crawlers — a group that kidnaps those wandering the city and turns them into soldiers

Clone 3 meets Poppy, a smart eight-year-old girl that helps her escape from the Crawlers. Clone 3, now affectionately named Trio by Poppy, finds an instant love for the young girl, and will protect her at all costs. Trio doesn’t question this instinct to protect Poppy, she feels she has to do it and feels happiness in doing so.

It’s not long before Trio migrates into Poppy’s group, which consists of Poppy’s older brother Beckett — the leader of their group — and other surviving children.  Meanwhile, visions of the old world assault her. She knows she must get to a statue, a statue that may have all the answers she is seeking.

In an epic tale in which kids come to the aid of a dying world, I found Clone 3 to be a well written and wonderful book. You will become immersed in the fast-paced story telling and amazing detail of the world. From the first page until the final sentence, you are taken on a journey in a world that has been dead for decades. You literally walk in Trio’s footsteps as she describes the cracks in the sidewalks, the dirty and hungry kids she meets, the smells around her. This beautifully written book has set a new level for what Young Adult novels should be.

Love it? Buy it on Amazon