ABCs of Death, The 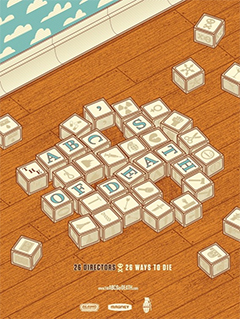 I’ve always thought of writing for anthology films as a big challenge because one can’t quite decide what piece of it deserves the most time. With The ABCs of Death, this is an exceptional challenge, considering there are twenty-six short films in the mix. To make this anthology, each director that participated found themselves with a letter of the alphabet and was asked to choose a word. They then created a short based around the word that dealt with death.

Even though the films are shown in alphabetical order, there’s a lot of mystique attached to some of the words chosen if you don’t know ’em beforehand. It sounds silly, but it’s one of the little charms of the film that keeps you guessing throughout certain shorts. For the sake of avoiding spoilers, I will refer to each short by only letter and director.

While it might sound like an outrageous concept, the complete creative freedom that the directors were allowed for this project proves to be extremely beneficial for some shorts. Obviously when you’re faced with twenty-six shorts, they’re bound to range in quality. It’s the short lengths and quick transitions to an entirely different piece of cinema that make The ABCs of Death work well, often following up a bad short with an entertaining one.

Thankfully, the creative minds attached to The ABCs of Death don’t restrict themselves to the limitations of the horror genre. The use of straight comedy appears in many, the best of which might just be Iguchi’s F, while other shorts like Rumley’s P focuses on drama with only minor elements of horror. There are, of course, plenty of horror films that manage to be plenty disturbing while still entertaining, and Tjahjanto’s L is a great example of that. In addition to the collection of live-action works of all genres, the film also features animated works, like Hardcastle’s T and Morganthaler’s K.

Of the short films, there are some that are incredibly stylistic, like Cattet & Forzani’s stellar O, which is just as aesthetically pleasing as their feature Amer. If Wingard’s brilliantly meta short Q is to be believed, these shorts were each made on a $5000 budget. While Ti West’s shameful letdown M and Traucki’s pointless G will leave many scratching their head wondering where that money went, most of the directors spent their cash well on effects and props.

Such props and effects lead to some of the wilder and more engaging shorts within The ABCs of Death. Plenty are out of this world, but some of the most memorable things are the cartoon-like anthropomorphic characters within Malling’s H and the sheer mass-scale insanity of Schnepp’s W. And let’s not forget everything in Nishimura’s Z, which is an impossible to describe tribute to Kubrick’s Dr. Strangelove.

It’s nearly impossible to pick a favorite with most of these directors turning in entertaining little films, but one of the best that I have yet to mention is actually Y by Hobo with a Shotgun director Jason Eisener. It’s a stylish and disturbing little flick with no dialogue that relies on colorful camerawork and an awesome instrumental Powerglove piece to create one hell of an engaging story.

Regardless of how many of the shorts one ends up liking or disliking, there’s no denying that The ABCs of Death is presenting audiences with an international smorgasbord of film-making that they might have never witnessed without it, and that’s something to celebrate.