I had the pleasure of interviewing a New York City based actor, voice actor of Japanese animation, director and producer, Jamie McGonnigal. He lends his voice to shows such as Pokemon, Weiss Kreuz (Omi), Magic User’s Club (Takeo), World of Narue (Kazuto),The Weathering Continent (Tieh) and much more. Jamie is also an activist for LGBT rights.

My first impression of you was at ACEN in Chicago a few years ago. You were so down to earth and funny. How do you hold onto being so humble?

I’m currently laughing really hard at this question because if my fiancé was reading this, it would elicit the biggest eyeroll of all time. I actually don’t think I’m humble at all. Down to earth… most of the time, I guess. I just feel as though there are so many people out there doing such incredible work, not only as voice actors, but as people really changing the world and making it a better place to live for everyone else. As a voice actor, I’m entertaining some people and having an awesome time doing it, but at the end of the day, there are other people who should be getting a lot more attention for their work than we do. 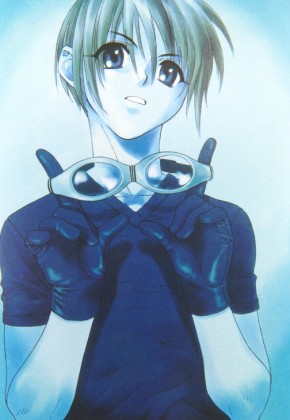 Do you know how many licks it takes to get to the center of a tootsie pop?

Okay, let me bring you back a bit about your acting. When did you say to yourself that this is what you wanted to do?

I was ten years old when I first started doing musicals. I was HORRIBLE at any sport and my mom helped me find theater, and I loved it. I threw myself into it head-first and even became a little obsessed. Actually, we were watching the Tony Awards last night with friends and I found myself laughing inappropriately at so many jokes that anyone outside the Broadway community just would not find funny. Anyway, I’ve been acting since a really young age, went to school for it and wound up in NYC to pursue it. Now I still do some voice work, but since I live in D.C., it’s a little harder to pursue a full-time career in it.

How did voice acting fit into your life and do you continue to do it?

Voice acting actually supported me for a long time in NYC. I was producing a lot of Broadway concerts and benefits for charities doing important work, and since almost all of it was volunteer work, the voice work was paying my rent. I do continue to do it here and there. I’ll continue to do what I can when I can.

In 2012 is there a project you are working on that you can talk about with voice acting or theater?

Yes, I’m still playing Trip on Pokemon, but most of my time is spent working at the New Organizing Institute in Washington, D.C. and spending time with my family.