Could you speak on your activist roles with the LGBT community?

I’ve always had activism in my blood having grown up in a liberal family. My grandfathers actually organized some of the first labor unions in the country, so I’ve always been interested in it. But I guess what activated me to not only get involved, but change careers was California’s Proposition 8. To see gay and lesbian people not only discriminated against but to have a right granted and then ripped away, was disgusting to me.

Since then, I’ve been heavily involved in the LGBT Rights movement. I organized 25 buses to bring organizers to D.C. in 2009 for the National Equality March, put together a rally at the White House to fight Don’t Ask, Don’t Tell and now I work with the New Organizing Institute helping to get progressives organized around the country. 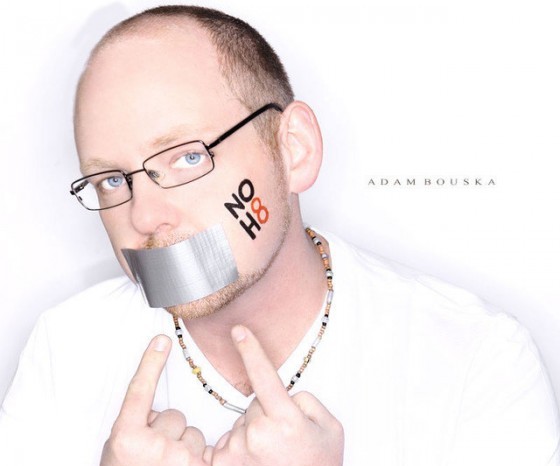 For young kids to adults who are still struggling with their sexuality, what would you say to them?

I’d say come out of the closet, if you can. Harvey Milk once said that they vote for us 2-to-1 when they know one of us, but figures are showing something different. Not only do we have to come out and tell people who we are, we have to educate our friends and family.

Every day there are bigots trying to spread phony and false information about who we are and the lives we live. And every one of those statements has been proven to be utterly false. We’re moms and dads and brothers, sisters, cousins, uncles and aunts. And we’re bankers and firefighters, waiters, actors, lawyers, teachers and architects. For so long, people who’ve never known one of us imagine us only as the guy in the Pride parade in a pink and purple glitter-covered thong. And while that’s part of our community, many of us have never even been to a Pride celebration.

All we are looking for is the same protections for our families that any family headed by a straight couple has. I want to be able to have kids and not worry that the government thinks of us as strangers. I want to not have my husband deported if he’s from a different country. I want to walk down the street with my husband without worrying one of us might get beaten or killed. These are the things straight people don’t have to worry about on a daily basis, which we do.

For anyone that wants to support the LGBT community, despite background, religion or sexual orientation. What do you think is their best way to get into the fight for equality?

We need our allies to speak up. While support is great and your votes in our favor are wonderful, what we need more than ever is for all of you to start conversations. At the water cooler, the dinner table, the bus stop or elevator, start a conversation about what equality means. If there’s a vote coming up in your state, don’t just tell your gay friends that you’ll vote for us. Go and tell your friends why. Let them know the truth about your friends and family who are LGBT. And let them know that all we want is the ability to protect our families.