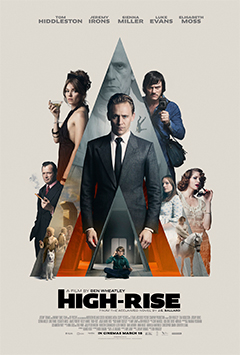 High-Rise starts with Dr. Robert Laing (Hiddleston) calmly surviving in terrible conditions in the titular building. Flashback to three months earlier, and he has just moved into this modern luxury building, with all the conveniences one would need to never leave except for work. But all that glitters is not gold, it will take very little to turn this into chaos.

High-Rise is an adaptation of a 70s’ novel by J.G. Ballard, and British producer Jeremy Thomas has been trying to adapt it to the big screen since then. Lo and behold, almost 40 years later, he got his wish with married couple director Ben Wheatley and screenwriter Amy Jump.

The film is set in a parallel 70s world, that seems to be the 70s vision of a modern (back then) era. So yeah, basically a retro-futuristic look, which can be seen in the brutalist architecture of the building itself. Also, just like in Snowpiercer, High-Rise is an allegory of society. The lower middle class lives at the bottom, the upper middle class live in the middle, the upper class lives on the top floors. And so, when things start falling apart in the building, we get a class war.

The cast does a superb job depicting this, starting with Hiddleston as Laing, who, more than a protagonist, is the one who gives us our POV. Laing seems like a civil fellow, quite charismatic and charming; but he’s also self-contained, someone you can’t totally read, and that makes him a bit creepy, and he sure wastes no time to adapt to the morally bankrupt microcosmos that surrounds him.

For a more obviously predatory character, we have down-on-his-luck documentary producer Richard Wilder (Evans), who helps ignite the class war, as well as document it. As his name suggests, he’s more savage and quick to act when he feel he’s had enough with his lot in life. Then we have Anthony Royal (Irons), the noted architect of the high-rise, who basically lives isolated in the penthouse, with his estranged wife Ann (Hawes), and the help. Royal does believe his building is the way of the future, and one can argue he has good intentions. Besides that, we have women from all the different strata of this society: Helen (Moss), the heavily pregnant wife of Richard, and Charlotte (Miller), Royal’s aide; both help illustrate the situation in the building, as well as develop interesting relations with Laing. There’s also actress Ann Sheridan (Guillory), who will team up with her friend Ann Royal, in order to make due during the events of the film.

The only thing that didn’t work so well it’s the swiftness of how things fell apart. In the middle of the film, we have a beautifully arranged montage, showing us Laing’s (and the rest of the denizens) descent into madness and a cease of social constraints. Up until that moment things weren’t that terrible, even if you could feel the spirit of anarchy lurking nearby. After said montage, everyone acts as if they are in the Mad Max universe. The time jump did a disservice to the built up of the tension.

Visually striking, High-Rise reminds us of Kubrick aesthetics, with its camera movements and edition. Then there’s constant use of kaleidoscopes, implied or straightforward, who adds to the slightly trippy and uncomfortable ambience of it all. Another good element of the movie is the music and, specially, the sound editing. I specially appreciate the use of Portishead’s cover of ABBA’s S.O.S. All this elements come to together to make a disquieting movie, whose atmosphere of unease is always present, even when things just started to go wrong. It’s a beautiful and chilling movie, but not for everyone.