Let’s start with more Spider-Man in comic books! Dude will also get to teach at Jean Grey School for Higher Learning in Spider-Man & The X-Men #1. So how come he’s the newest Special Guidance Counsellor? Because the recently deceased Wolverine asked him to. Here’s what writer Elliot Kalan has to say:

He’s there because Wolverine asked him to do it, though being a teacher isn’t the extent of his mission. Before Wolverine died, he had a suspicion that something was amiss at the school and that one of the students wasn’t what they seemed. Only he didn’t know which student. It’s Spidey’s job to find the truth – though he can’t help but hope to also have a positive influence on the lives of the students. 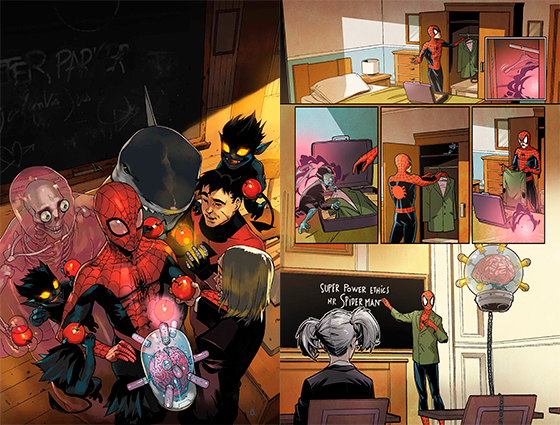 Just look at how precious he looks teaching Super Power Ethics on that oversized jacket!

Continuing with the comic book theme, OMG February’s Thor Annual will be made of awesome! First, we get the greatest Noelle Stevenson (of Nimona and Lumberjanes fame) writing a story for the Goddess of Thunder with art by Marguerite Sauvage! Well, I would have also liked if Noelle did the art but I guess it’s not suited for superhero comics unless it’s quirky and sorta comedic?

[Thor editor] Wil Moss read my webcomic Nimona and reached out to me asking if I wanted to contribute a story. Naturally, I said yes. I mean. Of course.

Well duh, of course Noelle said yes! It’s her first time in Marvel, so I hope it turns out great and will be the first of many collaborations! Also writing for Thor Annual is wrestler CM Punk (real name Phil Brooks). And he still doesn’t know how he got the job but he sure is excited for it!

I wound up talking to [Marvel Comics Editor-in-Chief] Axel Alonso and it was always kind of like, “Yeah, yeah. We’d love to have you do something! We’d love to have you do something.” And you know, I was always just so busy. I think I just pestered all the right people and the right things kind of popped up. How exactly it came up, I can’t really, exactly remember. I can’t remember who said, “Hey. Wanna do Thor?” You know what I mean? That pretty much blew my mind. I have to say, it’s been a long process.

On comic book movie news, Doctor Doom is a anti-social blogger/programmer in the Fantasfic Four reboot. Yep. All those internet trolls? They are now as bad as Doctor Doom. Yep, actor Toby Kebell spilled the awful beans during an interview about Dawn of the Planet of the Apes Blu-ray/DVD:

He’s Victor Domashev, not Victor Von Doom in our story. And I’m sure I’ll be sent to jail for telling you that. The Doom in ours—I’m a programmer. Very anti-social programmer. And on blogging sites I’m “Doom”.

OMG! HBO will make a turn Isaac Asimov’s Foundation books into a TV series!  Jonathan Nolan, who is already working with HBO on Westworld, will also be in chard of this new series. OMG! I hope they do it right! They should use the original first three books. But I wouldn’t mind if they use the prequel and sequels as world-building. Here’s what Nolan had to say:

Well, I fucking love the ‘Foundation’ novels by Isaac Asimov. They’re certainly not [unknown], but that’s a set of books I think everyone would benefit from reading. That’s a set of books where the influence they have is just fucking massive. They have many imitators and many have been inspired by them, but go back and read those, and there are some ideas in those that’ll set your fucking hair on fire

Here’s the official launch trailer of LEGO Batman 3: Beyond Gotham. Yeah, for a split second I thought this was the trailer of the Lego Batman movie. Then I remembered LEGO makes lots of video games. As usual, it looks fun and adorable~

Yep, we are totally getting Thomas and Martha Wayne’s murders in Batman V. Superman: Dawn of Justice. Probably just a flashback though. But check out this image of a theather playing The Mark of Zorro. It’s the first time a Batman film has acknowledged Zorro’s significance to Bruce Wayne. That movie was replaced by an opera in The Dark Knight trilogy, and totally unaddressed in the Burton/Schumacher films. 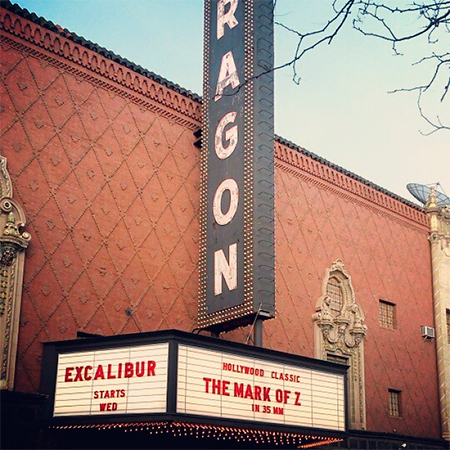 But hey, it can join the supercut of Batman’s parents dying~

So, we have a first possible name of a female director who could direct the Wonder Woman movie. And she is Michelle MacLaren! She has good CV working on great TV shows such as Breadking Bad, Game of Thrones and The Walking Dead. Well, those are good credentials! I hope it happens!

On Marvel news, James Gunn has an important announcement, you guys: Guardians of the Galaxy ain’t not subservient to The Avengers!

James Gunn also talked with Entertainment Weekly about which character he would like to explore more in future Guardians movies (Youndu, Nebula, The Collector), and about the comparison between.Thanos introduction in Guardians to the Emperor in Empire Strikes Back.

We definitely talked about the Emperor. The most difficult thing was to introduce Thanos in a way where he’s cool, but not make our antagonist, Ronan, look like a wuss in the process. That was a real delicate balance.