Ryan Murphy has said goodbye his long-time home of 20th Century Fox for a lucrative deal with Netflix. Said to be worth $300 million, the five-year pact will give Netflix exclusive rights to Murphy’s future television AND film productions. Chief content officer at Netflix, Ted Sarandos, had this to say:

From Nip/Tuck — our first licensed series — to American Crime Story: The People v. O.J. Simpson and American Horror Story, we’ve seen how his brand of storytelling captivates consumers and critics across the globe. His celebrated body of work and his contributions to our industry speak for themselves, and we look forward to supporting Ryan in bringing his broad and diverse stories to the world.

We had too cool posters this week, one from Ready Player One, and the other for Avengers: Infinity War: 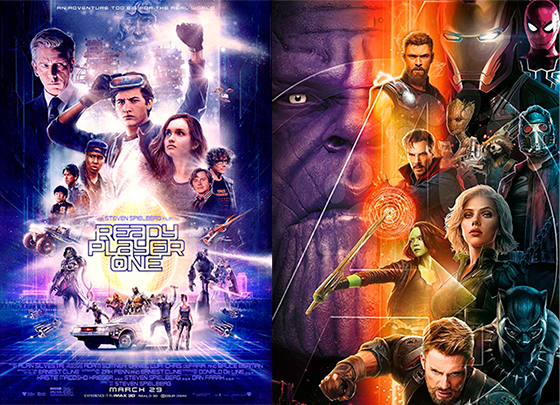 Fox is apparently moving ahead with the Kitty Pryde spinoff and have hired comic writer Brian Michael Bendis to write the script. It has been codenamed ‘143’, which could be a reference to Uncanny X-Men #143, a famous issue in which Kitty Pryde is left alone at the X-Mansion has to fend for herself against an invading demon.

Check out the English-dubbed Batman Ninja trailer! The feature-length animated film arrives on Digital starting April 24, 2018, and Blu-ray and DVD on May 8, 2018. Here’s the synopsis:

Batman Ninja takes a journey across the ages as Gorilla Grodd’s time displacement machine transports many of Batman’s worst enemies to feudal Japan – along with the Dark Knight and a few of his allies. The villains take over the forms of the feudal lords that rule the divided land, with the Joker taking the lead among the warring factions. As his traditional high-tech weaponry is exhausted almost immediately, Batman must rely on his intellect and his allies – including Catwoman and the extended Bat-family – to restore order to the land, and return to present-day Gotham City.

The Millennium Falcon looks different in Solo. Different as in, it doesn’t look like, in Kylo Ren’s words, “a piece of junk”. Here’s a spoiler-free explanation, courtesy of scripwriter Jon Kasdan:

Where Han gave it a certain shabby coolness and a dinged up quality that reflected where he was at that point in his life, this Falcon reflects its owner very clearly in its shape and aesthetic and his needs, even if those needs be a little more space to entertain. […] One of the things Larry and I had talked about was the Falcon should always reflect the personality of its captain. 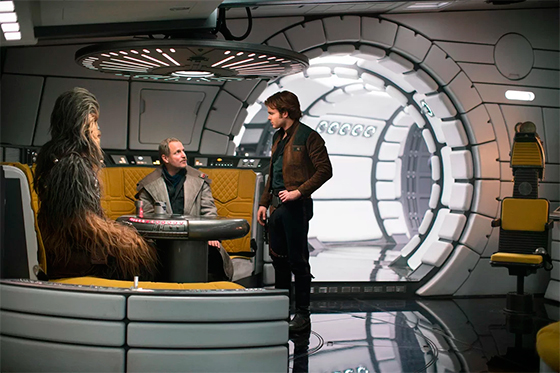 Here’s the trailer for Ash vs Evil Dead season 3, which premieres on February 25. Damn that demon baby is the best/worst!