As it was last year, K-pop Night Out is always a huge highlight for SXSW. And while last year’s was stellar (considering the turn of events leading up to this particular night), this year an actual miracle occurred, something most couldn’t have expected in a million years. An addition to the lineup so jarring, people who may not have been sold on the idea of actually making the trip to Austin bought their tickets the second it was announced.

After an interview, the night actually starts with a little industry function: free food compliments of Chilantro (two words: KIMCHI. FRIES!!!), open bar, and entertainment in the form of a very adorable and very soft-spoken Kim Hoody. Up to that point I’m pretty sure she’s quite possibly the cutest thing on the face of the planet. Not to mention her “Slay me, Princess!” pink pumps! She’s truly a lovely bit of serenity before the sheer madness of the evening laid out before us. 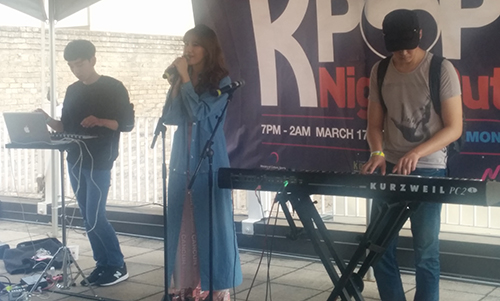 Fast forward about an hour: the Belmont is filled to capacity, the LCD screen in front starts scrolling through music video clips of each artist, and I park myself in the same exact spot next to the balcony stairs that I had last year. Life is good. There’s a buzz, unsurprisingly. The audience is just as anxious to get the evening started as they were last year, perhaps even a bit more considering who’s on the roster for that evening. When the first artist finally makes it to the stage, suffice it to many audience members were… confused.

Now, before I regale you with the absolute elegance of Bobby’s performance, let me just say the audience wasn’t prepared. The young ladies standing near me had no idea who he was, or his backing band. In my mind I’m thinking, “These girls have no earthly idea what they’re about to experience.”

Once he starts strumming his guitar (that he claimed in our interview earlier he bought on Craigslist for $50), the most luxurious sound absolutely oozes from the amplifiers. His brand of folk is tinged with a heavy blues, like he’s always got a lover’s lament in his heart and a pretty face on his mind, which upon reflection makes sense. However, there’s also immense joy and excitement in his performance. He gives the same hilarious quips he always does, but in front of this crowd, the first he’s experienced at least at SXSW in the four years he’s attended, his bit works and instantly gets girls swooning over his easy smile and dark sense of humor. Remember our young ladies up in the balcony with me? Gone are their skeptical glances around to see if anyone else is just as confused as they are. Bobby has garnered himself some bona fide fan girls, all turning to me, since I’m the only one there who seems to know him, exclaiming just how cute they think he is. Imagine their forlorn faces when I had to break it to them that this dapper fellow is, in fact, happily married. 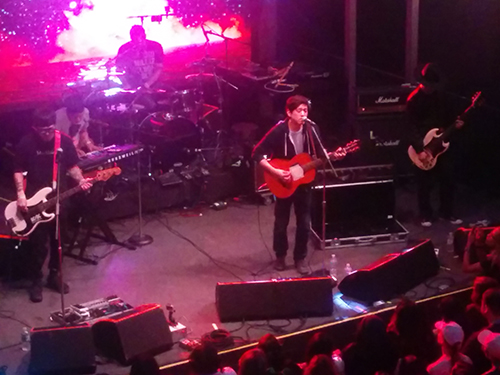 But this night is certainly about the music and the man making it. In his first appearance at KPNO, Bobby is as at home on this stage as he is on any other. He’s got a confidence that belies some of his shyness, but even that seems to have evaporated after the past year. His voice is strong, as in there’s so much more confidence than I remember ever having heard out of him. With the backing of his fans and friends, he’s made it here, to this very moment where he’s able to show this corner of the world just how magnificent an artist he is. And I couldn’t be more elated.

It’s that feeling you get when someone you really care about or a family member finally makes it. You, of course, have always known of their greatness. But now the world, or even a small portion of it as in the microcosm of K-pop Night Out, gets to experience everything that you’ve known for years. While many of the concertgoers are unsure at the beginning, about halfway through his second song, I sense a shift in energy. I can see the physical impact Bobby begins to have on the audience: a subtle sway that turns into a gently ocean wave with just the sheer amount of bodies combined in an unconscious synchronicity. This is truly one of the most beautiful moments I’ve been able to observe at any live event I’ve ever attended.

Then things take a turn for the absolutely electric. Bobby’s backing band hurry backstage as he sings his last song. Once the last note fades, we’re once again left in anticipation. Again, the young ladies standing next to me turn and begin to ask me about the next act. A new girl joins our small party, someone who isn’t particularly fond of Korean music, thus knows absolutely nothing about it. I inform her, “Honey, this next band is going to melt your face off.” She’s obviously skeptical, but as soon as those lights dim and the image of South Korea’s rock gods springs out in all its color, those in the crowd a little better informed absolutely lose. their. SHIT!

Without preamble and almost no warning (save for the announcement on the LCD screen) No Brain erupts in loud a slap of the drums and a guitar riff that cold melt the undergarments off any unsuspecting females expecting a little light rock. And again I find my small group of K-pop fans all a-quiver from the sheer magnitude of the band’s stage presence. More mouths agape in awe, more questions about the relationship status of the band members.

The crowd has absolutely erupted. I’m not even being facetious. There was a visible explosion of movement, noise, and excitement. No matter where No Brain perform they control their audience. Sungwoo, ever the consummate performer, has a way with a crowd that should be envied. With just a flex of his finger he has the audience worshiping at his feet and praying at his altar. When Dolly emerges from the drums and performs his famous Soju Song, a bottle in each hand as he makes his way to the front of the stage, the ladies in the pit sort of sit there a moment before he extends his bottle. Those familiar with the routine have their shot glasses in hand, and with his first guttural wail, every single member of that audience loses the plot, if for no other reason the man holding the shot glass above his head has infiltrated their spirits and made them react in ways they probably didn’t expect to before they filed into the Belmont. 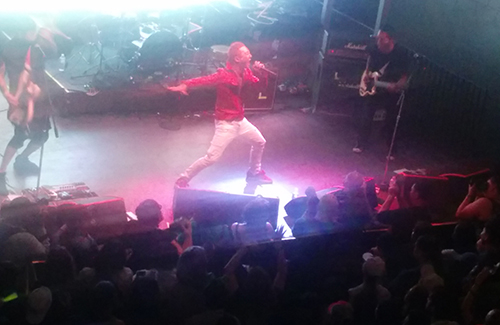 The band is as energetic as they were when they first started performing over 20 years ago. Sungwoo’s smile could knock the clouds from the sky and wrestle them into submission. The energy, the love of performance, the unadulterated delight to be on stage again, living in that moment and embracing every single soul standing there, drinking in his presence, it all culminates in one of the most amazing performances I’m sure the Belmont has seen. Just as I’m sure the audience has decided to give their souls for No Brain’s cause, their set is over. The applause and adulation is deafening, as it should be, and the band walks off the stage.