At this point the audience is absolutely intoxicated, drunk off the pure energy emanating from the stage. More than when they first entered the venue, everyone is anxious. If the first two acts had this much of an emotional impact on them, what could they expect next?

Certainly not what they got.

*sigh* Galaxy Express…. What can I even…? You know what, no. There are words for this band, solid words. This is a band who completely bathes in the music. That’s what it is. This band is probably one of the strongest examples of the purity of music, the need to pick up a guitar, a set of drumsticks and just play. As with No Brain before them, they epitomize performance. From the very first note everything about their music, the way they move onstage screams, practically drips rock and unapologetic sex. The way Jong-hyun plays his guitar, mouth open, head back, eyes closed and fully immersed in the love he makes to that instrument…. It’s like watching a man find religion and the sins of the flesh all at the same moment. And the crowd is just beside themselves. Of course, the fact that he gets so wrapped in the music he takes his shirt of doesn’t hurt. But it’s more than just the eye candy (and, honey, let me tell you, I’ve got one hell of a sweet tooth). This was a man so confined by the fabric of his T-shirt he had to rip it off just to feel his skin on the smooth surface of his weapon. 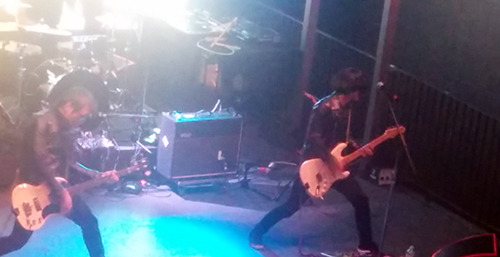 Let’s not get started on just how perfect his voice sounds next to the guttural bark and snarl of Ju-hyun’s. Their voices are just pure sin. Though the bassist did refrain from removing all but his leather jacket, that voice… just…. If you could just imagine the Korean equivalent of Howlin’ Wolf when he scratches your ear with proclamations of his voodoo on your soul. That’s what I’m talkin’ about. Couple that with the pound-pound-pound of Hee-kwon’s drums, the throb of the bass guitar, and the heartache and desire seeping from that damn guitar, you’ve got an audience that is running itself ragged with screaming.

Just with the acts preceding them, as soon as the audience is about to give up the collective ghost, Galaxy Express’s set is over and we’re all left trembling in anticipation for the next act to take the stage.

And we come to the part of the evening absolutely nobody was ready for.

A couple weeks before SXSW actually got into full-swing, MFBTY CONFIRMED THEY WERE PERFORMING! That’s right: legends Tasha and Tiger JK finally decided to make the trek from Uijeongbu, South Korea, to Austin, Texas, for the first time since K-pop Night Out’s inception in 2013. Not only were they coming, they were bringing all the members of the Feel Ghood family: LL Cool Bizzy and newest members Ann One and Junoflo. The official lineup had Tiger performing before Tasha, but those of us who know the MFBTY team know they always perform together anyway. So even as the screen lit up with small clips of Drunken Tiger and by extension MFBTY, the crowd roared because we all knew if one shows up, they all show up.

The screen goes dark for about half a second. Then… magic. 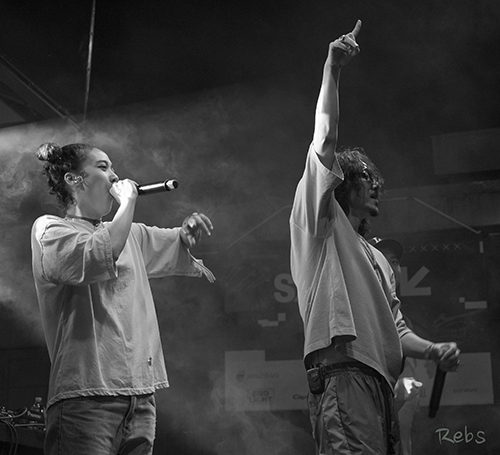 If you don’t know anything about Tiger JK, let me tell you, the man has zero filter. When I say he just says what’s on his mind, no matter what it is…. He openly admits to having his fill of the open bar, and honestly nobody would’ve noticed if he hadn’t said anything. He’s actually just that much of a free spirit and open soul. But Tasha just stands in the back and shakes her head, the antics nothing new to her at this point in their nearly ten-year marriage.

However, that’s not what this night’s about. The entire first half of the Feel Ghood set is purely about music. Opening with classic Monster, flowing naturally into more hits, handing the spotlight over to Bizzy (along with a PSA that, yes ladies, he is in fact single), then introducing the baby of the family, Junoflo, with his undeniable skill and uncanny adorableness (y’all, I was not expecting him to be a cinnamon roll). By the time we get to Ann One, the crowd is actually unable to sit still, even between songs when Tiger’s regaling us with his love of Texas women. Then Ann lets loose these notes that are sure to make shy virgins blush with just how damn sexy she is. We even get a bit of Tasha giving us a slow wind, which, of course, gets Tiger’s attention…. And things just continue to escalate until we’ve got a certifiable party on our hands. If this had been anything other than K-pop Night Out, I’m sure police would’ve been in full-force to shut down the function. 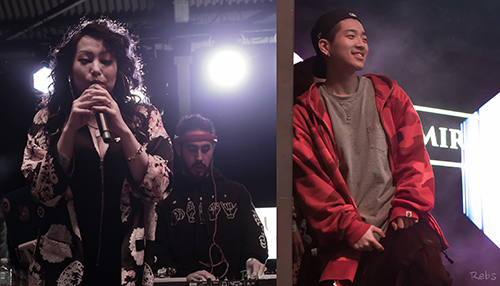 They take a break for about five minutes, leading into what’s billed as Tasha’s set (but is really just Feel Ghood part 2). Before the family takes the stage, DJ Zo (currently working mostly with Korean-American rapper Dumbfoundead) spins a set, complete with current Top 40 and hits from a few years ago. One of the girls next to me, who swears up and down she’s a true hip-hop head, screams for him to “Play real hip-hop!” And I just have to laugh. Fortunately, she doesn’t have to wait long. Feel Ghood returns, and from there the madness just erupts to a pitch that rivals most rock concerts. Combined with her most prominent hits, of which Black Happiness will always be a favorite, she and Ann One decide to pay homage to another goddess of the game: Ms. Lauryn Hill. You want to talk about fan spazzing! Everyone over the age of 21 in that audience was beside themselves watching a queen give another queen props during her set. The ladies next to me I think were shocked by my enthusiasm. I knew practically every word to every song and couldn’t contain my emotions. It had been a dream of mine to see MFBTY live just once in my life. Being blessed with the entire crew was akin to being told I’d be having Halloween, Christmas, and my birthday all at the same time! 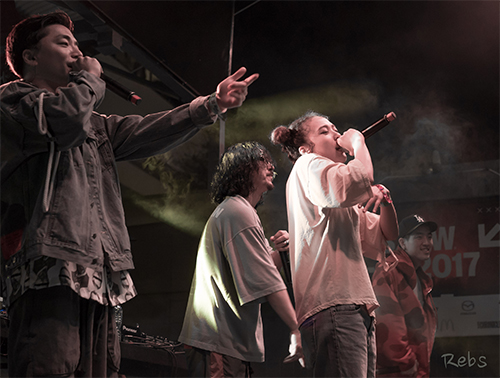 As hard as I try, I can’t conceal my favoritism. The Feel Ghood family had truly one of the purest stages I’ve ever seen. This wasn’t a performance for performance’s sake or gaining fans. This was a family gathering, a reunion, a meeting of souls and vibes. If you truly want to know what it’s like to be completely enveloped in the spirit of a group of artists, if you want to experience the kind of love that makes a soul warm, you must see the Feel Ghood family live. Honestly, the connection each and every one of them has with one another is so genuine it suffuses their performances. The energy spills over—a cup abundantly overflowing with positivity and unconditional love.

Unfortunately, I wasn’t able to stay for Hyolin or Red Velvet’s sets. However, the acts I did see…? There’s a moment during the night where I’m sure I’d never been happier or felt more secure. This wasn’t just a hodge-podge collective of performers. This was a celebration, pure and simple. Music at its truest, most elevated. I can honestly say up to this point I’d never been more emotionally overwhelmed and excited at a concert. After missing so many cons last year after my first SXSW, to see this lineup, experience this magic… all I can do is say thank you.

(Images of Big Phony, No Brain, and Galaxy Express compliments of my phone’s camera. Image of Feel Ghood via Queen Rebs.)