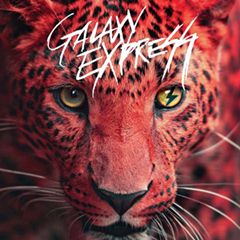 The wild guys of Galaxy Express are back at it again and rocking every ones’ socks off with their self-titled third album, Galaxy Express. I had to take my time reviewing this album, and after giving it a half dozen or more listens I feel I can give it the coverage it’s due.

The album has a strong start with Cha! Cha! Cha! Cha! The song immediately pulled me into the album. The piano under the main instruments added a new element and reminded me of early American rock, during the days of legends like Chuck Berry and Elvis Presley. They crank things up with Horongbul, which is just a scream-filled energy punch.

My favorite surprise from the album is Remember the Day – an acoustic track, not something I expected from Galaxy Express, who are known for their loud and energetic style. The song transitions are smooth, flowing easily from the higher energy tracks down to the slower ones with liquid precision. Some rock albums just jar the listener from song to song, but not Galaxy Express.

How Does It Feel is a trippy song that evokes memories of the 70s and the height of psychedelic rock. It almost feels like the band is taking us on a musical history lesson throughout the album. It’s a great mix of classic rock elements that all adds up to a great listen. The sound is tighter and more compressed on this album, it has less of the wild abandon of Wild Days, but that doesn’t mean the album lacks any style or substance.

In the end the album is well thought out and energy filled, but lacks the grit and grime of Noise on Fire and Wild Days. They’ve spent time perfecting their sound and evolving on this album, and it shows. They sound clearer and more concise, and the songs are more melodic rather than just a raw garage band tone. I love both sounds, they haven’t changed completely, they’ve managed to blend their trademark wild sound with a higher maturity level to create a new, improved Galaxy Express. The more this band improves, the closer they come to greatness, and I look forward to seeing where their road takes them.

Best Tracks : You And I, Remember the Day

Buy the album on YesAsia