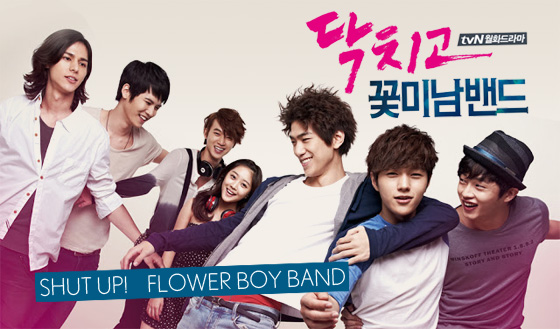 Headed by their mercurial leader Joo Byung-hee (Lee Min-ki) and moody second-in-command Kwon Ji-hyuk (Sung Joon), friends Lee Hyun-Soo (Kim Myung-soo), Jang Do-Il (Lee Hyun-Jae), Kim Ha-jin (Yoo Min-kyu), and Seo Kyung-jong (Kim Min-suk) make up rock group Eye Candy. This band of high school misfits, who play for the love of each other’s company, are suddenly forced to work within the confines of a very ruthless industry while still having to face ridicule and ostracism from everyone in their new high school.

Eye Candy find themselves in a heated rivalry with high school darlings Strawberry Fields, which is headed by the arrogant yet emotionally jumbled Yoo Seung-hoon (Jung Eui-chul), the high school’s prince. Things come to a head when Strawberry Fields bassist, Park Pyo-joo (Kim Hyun-jun) hires bodyguards to beat up Eye Candy’s enigmatic lead singer. After fleeing the fight, heavily bruised and bleeding, Byung-hee runs into the middle of the street and is killed by a speeding garbage truck.

Byung-hee’s death forces Ji-hyuk into a role he never wanted: band leader, a position further complicated when he falls in love with Soo-ah (Jo Bo-ah), Seung-hoon’s best friend and object of unrequited affection.

As a posthumous act of leadership, Byung-hee enters Eye Candy in a local rock festival with a song he’s already started writing. Inevitably, Eye Candy loses to—who else—Strawberry Fields. However, a netizen outcry garners the band immense popularity and a record deal as a result. Only Hyun-soo seems comfortable in the public eye. The others find it almost impossible to maintain who they are within the confines of their new lives. Not surprisingly their group dynamic begins to crumble, and the members are faced with an ultimatum: tough it out or break up.

It’s an interesting enough plot: high school kids who are inevitably incapable of dealing with sudden fame. This simplicity, however, opens the show to risking too many subplots that eventually devolve into high school melodrama. At moments that’s exactly what we get. For instance, the love triangle between Ji-hyuk, Soo-ah, and Seung-hoon gets in the way of the overall storyline, attempting to provide another object of ire to the band’s deteriorating foundation but ultimately shifting focus to the tumultuous relationship between the three.

At times the viewers’ suspension of belief is stretched rather thin. For example, Ji-hyuk manages to get the CEO of their record company to comply with most of his demands, almost unheard of in the music industry. The show’s conclusion borders on cliché and in the end disregards Byung-hee’s influence on the show’s main plot.

However, Shut Up! Flower Boy Band’s cast is well selected. Casting indie film star Lee Minki as Byung-hee brings emotional depth from the beginning, but it’s up to the remaining cast to carry the weight of the plot. Enlisting the skills of Kim Myung-soo (a.k.a. Infinite lead vocalist L) was a risk—an idol playing a high school student-turned idol. But he manages to reasonably shed his idol visage in order to tell an intriguing story. Sung Joon’s quiet intensity provides a very raw palette to the group dynamic. Jung Eui-chul does well to balance the maturity of someone brought up in the industry with the callousness of someone attempting to survive high school at the top. The female characters, unfortunately, are a bit of a disappointment. Their stories are intriguing, but their personalities are either exaggeratedly emotional, shy, or ruthless, with very little complexity or originality.

Through sixteen episodes, at times the plot got a bit too convoluted for its own good and some of the characters, particularly the females, left a bit to be desired in terms of range. However, the heart of the show is evident and brings enough emotional honesty to make the story successful. With solid music, an impressive storyline, and an even more impressive overall cast dynamic Shut Up! Flower Boy Band proves to be both highly entertaining and holistically successful.

You can catch the whole show on Viki.