Rihanna’s Swedish visit could have been better. Three shows were scheduled, one in Malmö and two in Stockholm. The result – two out of three shows were cancelled due to personal exhaustion. Her cancelling two shows was a bitchslap in the face for many of the fans who had to go home on that cold November night. 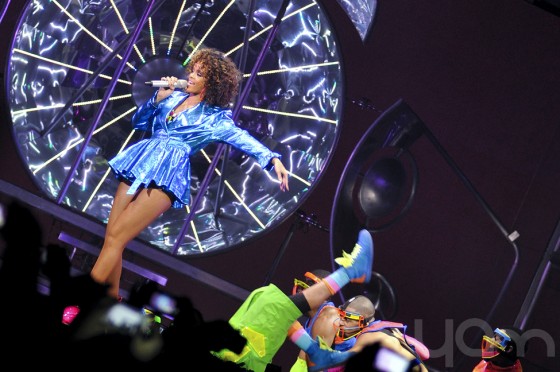 Fortunately, YAM Magazine got a photopass to the only show she performed.

The Globe Arena was filled with people of all ages who were waiting for their star to make her entry. Fifteen minutes passed, and people started to look more and more nervous and wonder if Rihanna would cancel this show as well. Every time the background music faded, people thought the show was about to start and the audience started to cheer, but to their disappointment, it was just another song by Nate Dogg or Eminem.

Then, all of a sudden, the lights faded, and Rihanna entered the stage. She started the show with Only Girl in the World, just what the audience needed, and they replied with cheers and many people started to dance.

However, it was fairly visible that she was tired. During the three sets that we got to shoot, you could see that she was running on fumes. She tried, she really did, but through the cracks in her smiles you could see a very tired 24-year-old girl who just needed some rest.

She is a hard working girl, and you have to respect that people get tired every now and then, but it is sad that the fans have to suffer for it.