Garbage – Not Your Kind of People 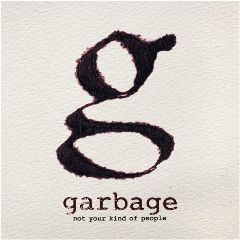 It’s been a long time since Garbage released a new album. After 2005’s Bleed Like Me, the band took a six-year hiatus, in which Butch Vig produced albums and songs for Green Day and Foo Fighters while Shirley Manson made her acting debut in Terminator: The Sarah Connor Chronicles. And now, the band is back and they bring to us Not Your Kind of People, their fifth album.

Is their return album worth a listen?

I have to admit that Garbage was very smart for making Blood for Poppies their first single, even if Shirley Manson didn’t sound as sexy and appealing as she used to be in the earlier two albums — the guitar sounds were stylish, though. The electronic, pop-friendly Automatic System Habit, the album’s first track, is an anticlimatic album starter with weak, silly lyrics — easily the worst that Not Your Kind of People has to offer, and it baffles me that it will be the album’s  third single. Garbage has done better pop-sounding songs before — Cherry Lips [MV] and Androgyny [MV] from 2001’s Beautiful Garbage come to mind. Shit, Automatic System Habit is something I would expect from Katy Perry. Big Bright World sounds slightly better in sound, but a bit childish in its lyrics.

However, it’s Control — one of the album’s best tracks — that signals a turning point for the album in terms of better sounds. The arrangement for Felt reminded me of The Smashing Pumpkins’ 1979 [MV] in a good way while the opening seconds of Battle in Me partially resembles Bon Jovi’s Livin’ on a Prayer [MV]. I Hate Love makes better use of the electronic elements than the first track did. Sugar, which boasts a great trip-hop sound, uses Manson’s seductive voice the best. The rest of the tracks fall into Garbage’s typical sound of years ago, which works well for the diehard fans.

In the end, I’m glad that Garbage is back after their lengthy absence. While Not your Kind of People is an improvement over 2005’s Bleed Like Me and fares slightly better than Beautiful Garbage, I cannot help to feel that their new album could have been better polished — ditch the first two songs and sharpen the lyrics on the other tracks.