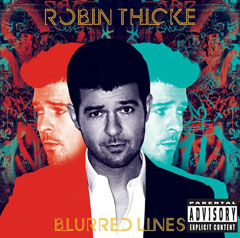 Robin Thicke’s latest has already aroused its share of controversy. He’s been releasing pretty mediocre fare in the years following his sophomore effort The Evolution… of Robin Thicke, most of the themes never wavering from a crooning soul powerfully entwined with his lover’s. Blurred Lines sees a slightly more sexually voracious and much less lovey-dovey side to the singer.

Let’s get the obvious out of the way. Title track Blurred Lines is just a monstrosity, highlighting Thicke’s desire to shed the “nice guy lover” image and try his hand at the aggravatingly persistent, callously misogynistic, borderline proponent of rape. The only blurred line is what he actually intended with the track. The disturbing cadence of “I know you want it, I know you want it” exemplifies a man who’s decided “no” is the equivalent of “I’ll do whatever the hell I want.” Whether he intended to coerce a woman into an act of infidelity or lie back and take it is still up in the air.

I was hesitant to listen to Blurred Lines long enough to review it, that’s how deep my disappointment ran. Unfortunately, my disappointment only grew as the album progressed. It was a poor decision to place the title track first, because the rest of the album seems to be his attempt to justify the actions of the previous song. The lyrics range from unoriginal (Go Stupid 4 U, The Good Life) to just plain vulgar (Take It Easy On Me, Give It 2 U) — as if to say, “What the hell, I’ve already gone this far.”

The use of popular rap artists on Blurred Lines suggests Thicke tried to recreate his own version of The Little Rascals’ “He-Man Women Haters Club.” Every lyric is an added smack in the face of the women they claim to love so much — which in turn just seems like Thicke’s sad attempt to sit at the “cool kids” table. What’s even sadder is that this is a rare instance in which the guest raps directly correlate to their respective songs, turning them into nothing more than revenge tracks or dark fantasies about women who’ve denied them in the past. Surprisingly his work with Pharrell Williams is always shockingly bad — surprising because both are producers and songwriters first. The music is… passable. There are some moments of vintage Thicke (Ooo La La) that highlight his abilities as a musician. But for the most part it’s all either faux-Disco or watered-down attempts at what Timbaland succeeded in creating earlier this year with Justin Timberlake.

It actually breaks my heart how utterly uninspiring and downright offensive Blurred Lines is. The lyrics are insufferable, and his delivery almost sounds uninterested, as if this is an experiment he felt failed from the get go but stuck with because he’d already had too much at stake. The producer-cum-singer seems to have decided he wants to go further down the pop road, cashing in on the promise of more popularity, and has attempted and failed to build up his machismo and image as a hyperactive teenage Casanova.

I’d been a fan of Robin Thicke for over a decade. The last couple of years I’ve been less interested, his offerings little more than carbon copies of everything else he’d done prior, highlighting a rising complacency. Blurred Lines provided me a rather violent push toward completely ignoring anything else he has to offer.

You can listen to Blurred Lines at Xiami.com. You can buy it on iTunes and Amazon (MP3, CD).