Pigeon Detectives, The – Up, Guards and at ‘Em! 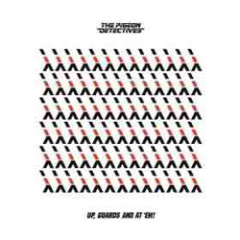 It’s been three years since we last heard from The Pigeon Detectives. Their disappointing second album, Emergency, came out in 2008, and since then, the band faded into partial obscurity. Now they are back with Up, Guards and at ‘Em!, their latest effort, hoping to earn some points in the highly competitive synth rock arena, but failing quite miserably.

Up, Guards and at ‘Em! is laden with generic, formulaic harmonies, whiny, unimpressive synth lines and unbelievably predictable guitar parts. Catchy hooks and poorly written lyrics prevail in this album mostly composed of mid-tempo, easy-on-the-ears tunes. The whole thing is an awkward hybrid of Gary Numan’s most commercial and shameful period, and Strokes-ish post punk revival.

I understand it might be hard to stay fresh in an area so widely exploited. Post punk revival, garage rock and synth rock have been the stuff of this last decade, with bands such as Interpol and Editors coming out with the best that these genres have to offer. Over these last few years, a slew of bands such as Kaiser Chiefs, Bloc Party and Arctic Monkeys have been raising the stakes for post punk revivalists all around. Their albums have been released to relative commercial and critical success, and their music has inspired up-and-coming bands to explore new territories and push the envelope. However, The Pigeon Detectives have fallen short in this exploration, choosing to remain closely attached to this initial style. Up, Guards and at ‘Em! has brought nothing new to the table, and has failed to forge an identity for the band in the hearts and minds of indie listeners. Instead, it has fully brought out the band’s weaknesses, making me wonder if they really deserve to be where they are.

Preview it on Xiami.com | Like it? Buy it on Amazon.com