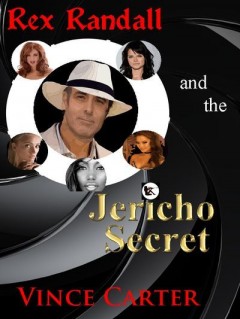 When told about this action thriller I jumped on the chance to read it. I haven’t read any action or thriller since Dean Koontz’s The Mask or Stephen King’s Cell. It was time to extend beyond my collection of romance, comedy and young adult books that I have read. I realized quickly that this book was going to be very different.

The book starts off with Rex Randall, a world-renowned writer for his Incognito novels. They star Jason Hendrix, a famous character in his own right. We’re told directly that Rex is, in fact, Jason Hendrix, his alter ego. Rex actually puts himself through the missions Jason goes through to create a realistic world through his writing. Rex Randall lives with five beautiful women in a polygamous relationship. They are skilled in many areas — from disguises to weaponry — that make up the base of the realistic world that Jason Hendrix was created in.

Rex and his female companions go undercover as security consultants in search of more material for the adventures of Jason Hendrix. As the group dives deeper into their assignment they learn of something that even the Secret Service is unaware of called The Jericho Secret, which could harm the President of the United States.

The synopsis intrigued me, giving me a goal to read this entire book in one sitting. I can give the book credit for having well-written dialogue that had flow and movement and great transitions between two talking characters. However, the writing that had nothing to do with dialogue was over the top choppy; almost like bumper to bumper traffic with someone that is heavy on the breaks. I just wanted to scream, “What’s going on? Foot. Ease. On. Breaks… please!?” You want to coast through the last of your day, not trapped in a moment that seems like torture.

I didn’t find myself connected to the world, but rather just skimming through pages for something better. My disappointment followed the first chapter. There was no voice to Rex Randall, no human quality I would have found fascinating about a character we should be made to believe is a real person.  He seemed a bit one dimensional, no flaws at all, and if he did have any I wasn’t made aware while reading. Instead of showing me what was happening through the words, I felt as though someone was giving me steps. The boring one-two-three steps you’d follow in a cook book. I don’t think I will ever look at the phrase “and then” ever the same way again.

There’s no free will for the reader to use the words like a paintbrush. No canvas we can paint with the author’s intent to draw us into a fictional world. For example, I would have loved to know how it feels to hold a gun, to feel that power in your hands. I wanted to smell the gun smoke in the air after shooting a few rounds. I wanted to imagine the weight of this weapon in my hand or how it felt to feel the recoil of the gun when it fired. Aside from the lack of description, there were too many characters. I understand Rex Randall is sort of a playboy, but to have five women in a book and they all seem really useless, it was hard to divide time between these woman and Rex. I know they were there to follow the leader, sort of act as employees for this type of business, but it wasn’t done in a way that I would want to care for these women. I didn’t understand why there were extra people around that didn’t do much for the story.

There was great potential in this creation because of how well written the dialogue was, which told me there was more I wasn’t given. I would catch myself flipping through pages just to get a conversation. The author had an idea, but I was sad that he didn’t follow through as hoped. It was unfortunate that I had to leave this world behind with much regret.