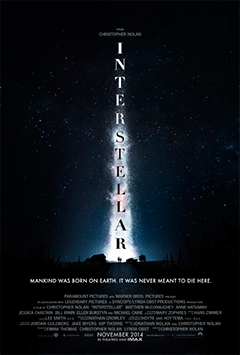 Do not go gentle into that good night.
Rage, rage against the dying of the light.

Interstellar is about a bleak future where all crops die except for corn (and that one ain’t going to last forever either), and so what’s left of NASA makes a last effort to save mankind by looking for another home in other galaxies.

Let me start saying that I am glad The McConaissance happened, even if I don’t like Matthew McConaughey outside of his acting. The entire set-up of Cooper (McConaughey)’s family life, that helped show what was wrong with the planet without being all exposition, was great. The best part was the relationships with his young daughter Murphy (Foy). Both were acting the hell out of these scenes and it made the audience care for the characters and want the mission to succeed. And after Cooper went to space, he kept being the anchor of the film.

The other actors did a fine job too. Specially the ladies. Congrats to both Hathaway and Chastain. Another character that stood out was the robot TARS (voiced by Irwin). TARS added some well-placed humor and also some drama.

Talking about TARS, the special effects, from the moment the mission went into space, were seamless. Everything looked great, beautiful and terrifying as space is thanks to a mix for CGI and practical effects. And it also made me want to see the movie in 4D just to feel all the space turbulence. It felt very 2001: A Space Odyssey, except there was no classical music. Instead we got goddamn Hans Zimmer, who did it again. The various moments of tension in space were simply better thanks to the soundtrack. All the organ music did wonders for these scenes, even if my poor heart was in my mouth.

Finally, the science! I felt there was a bit too much exposition in the astrophysics explanations. But I guess Cooper was a pilot and not a physicist. And yet, you could clearly see the guy was smart since once things were explained to him, he could get new ideas faster than the other crew members. And, considering it’s probable that very few of the audience knows astrophysics, I guess the exposition was necessary. The very few things I knew about the subject seemed fine and the things I didn’t they gave believable explanations. Except for that conclusion, that was mostly sci-fi and speculation; but I didn’t mind. In my limited knowledge, Theoretical physicist Kip Thorne did a fine job as scientific consultant.

As much as I loved Interstellar, I did have a problem with the movie: the ending. I can appreciate overlong corny endings, but Interstellar‘s ending was unnecessary and pulled the emotional punch of the movie. Yes, it reminded me a bit of the ending of A.I. Artificial Intelligence. And that’s a bit not good.

That said, I think Interstellar is a movie everybody should watch. And if you like beautifully depicted crazy science and well acted family drama, you will enjoy this film.