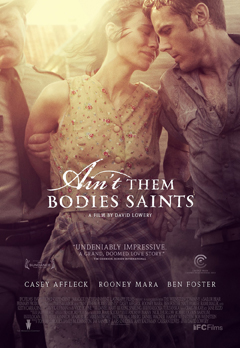 From Bonnie and Clyde to Badlands, the dangerous couple on lam has has been explored time and time again. In comes David Lowery, consumed with love for Malick’s visual poetry and disregard for proper narrative structure, to deliver a film that’s at times beautiful and yet surprisingly aggravating other times.

Ain’t Them Bodies Saints drops us right into Texas in the 1970s, presenting the life of outlaw Bob Muldoon (Affleck) and his wife Ruth (Mara). After revealing she’s pregnant, Ruth shoots a cop and Bob takes the fall, heading off to jail for twenty-five years. The years go by quickly and Bob escapes, longing to return to his wife and daughter, but the sheriff Ruth shot long ago (Foster) has his sights set on the two of them.

If it sounds like a conventional tale, it’s because it is, and Lowery doesn’t exactly try to add anything new to it. In fact, he desperately longs to deconstruct it by making it visually compelling in place of having a stable narrative. This results in some shoddy pacing, making it a slow burn with little to no pay off.

However nice Bradford Young’s cinematography is, and it is rather gorgeous at times when it’s not hidden by overwhelming darkness, it isn’t enough to truly draw one away from focusing on the lack of a narrative. With Malick and Lubezki, you’re almost taken to another world. Here, Lowery constantly reminds you that this is reality and reality kind of stinks. Clashing directly with the reminder of reality is a score that would be a pleasure to listen to on its own, but is often overbearing and penetrating when it comes to the film itself. To top that off, both Rooney Mara and Casey Affleck have a tendency to whisper quite a bit throughout, and that doesn’t mix well.

Neither of the two main characters are particularly all that interesting, adding another reason to why the narrative fails. Mara and Affleck have each delivered stronger performances than this, with Affleck in particular showing vulnerability in a much more impressive fashion in The Assassination of Jesse James by the Coward Robert Ford. This doesn’t mean they’re not good performances, and Foster does just fine himself, but they are all outshined by the supporting character that Keith Carradine plays, who genuinely provides some of the best scenes in the film.

For all its pacing and narrative troubles, Ain’t Them Bodies Saints does actually have some very interesting editing, which was strangely enough not done by writer-director Lowery (who co-edited one of the years best, Upstream Color). The transitions in a couple scenes are particularly breathtaking and something to be thankful for in otherwise dull situations.

Ain’t Them Bodies Saints has plenty of the right parts, but striving for visual poetry instead of focusing on structure and narrative hurts it greatly. Had David Lowery strived to be a little less Malick and a little more grounded, he might have just had a great film on his hands.