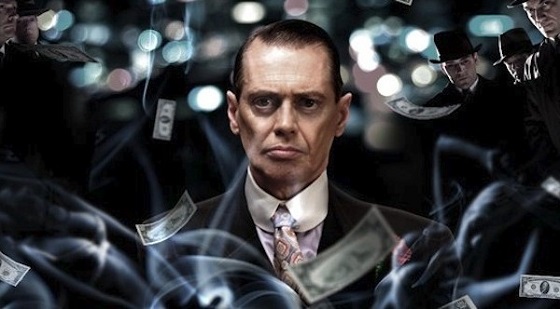 With Season 5 announced as Boardwalk Empire‘s final season, and it’s halfway through as of right now, I decided to revisit the first season, which is still pretty great to watch.

Boardwalk Empire begins just before the Prohibition period takes off in 1920 when Atlantic City Treasurer Enoch “Nucky” Thompson (Buscemi) arranges a deal with a number of his associates to get into the bootlegging business in order to pay finances for the city. Things go great for Nucky at first: lots of money is made, which leads him into continuing with the bootlegging business.

Throughout the first season, Nucky interacts with a lot of people in both his personal and political life, including mobsters, politicians, government agents, and the common folk who look up to him. However, only four of them are highly important: brother Eli Thompson (Whigham), the county sheriff and Nucky’s chief enforcer who subtlely displays jealousy against his brother and their relationship gets strained with time; Jimmy Darmody (Pitt), who returns to Atlantic City after WW1; Irish immigrant Margaret Schroeder (Macdonald), who tries to find a way to improve her family’s life; and Prohibition Agent Nelson Van Alden (Shannon), who stands strongly against every single criminal and investigates Nucky as much as he can.

Boardwalk Empire boasts great filmmaking quaility and visuals, and they don’t drop off drastically after the Martin Scorsese-directed pilot, which is really great and sets the tone for most of the season. While Nucky is poised to be the center of the show, it isn’t shown as such since the show has Nucky sharing the spotlight with Jimmy and Margaret often with pretty interesting stories (or backstories).

Margaret’s rag-to-riches tale in the first season works quite similarly to Peggy Olson’s rise in Mad Men‘s first season, but Margaret has it much worse at the beginning until she eventually stumbles upon Nucky’s life. And while her life improves, it’s not a smooth ride given the twists and revelations that Boardwalk puts them through. Well, some of Boardwalk‘s strongest scenes involves both Nucky and Margaret and they’re great to watch thanks to Buscemi and Macdonald playing the characters with excellence.

On the other hand, Jimmy returns to Atlantic City after World War 1 and hangs out again with Nucky as well as his wife Angela (Aleksa Palladino) and his son Tommy (played by twin brothers Brady and Connor Noon). However, a discussion between them plants the seeds for Jimmy to turn against Nucky and kickstart Nucky’s path towards being more than just “half a gangster”. We also get to see his mother Gillian (Gretchen Mol), who makes a living out of running a brothel and loves Jimmy way too much, as well as his relationship with the Commodore (Dabney Coleman), whose interactions and dilaogues completely sets up Jimmy’s path for Season 2.

While it’s a pretty great show to watch, Boardwalk Empire isn’t free of flaws, especially when it comes to the ultra slow pacing due to the show often showcasing more dialogue between middlemen as well as its main characters rather than the violence that one would expect from a gangster show — Boardwalk is violent thanks to the likes of a newbie Al Capone (Graham) and the half-masked Richard Harrow (Huston), but it doesn’t feel as violent as fellow HBO shows The Sopranos or The Wire thanks to Nucky using his brains and money to survive — and the Lucy Danziger character (Paz de la Huerta) sticking out like a sore thumb because Paz’s acting isn’t on the same level as the rest of the cast (which are mostly great) and I found Lucy to be a boring and uninteresting character that is mostly used for nudity content until the season finale, which changes her path drastically. Although, I’ll admit that Lucy had two memorable scenes: one of them involved a Margaret and it was a game-changing moment for this season because after that encounter, Margaret rises through Nucky and Lucy falls hard without him. The other one happens near the end of the season and involves a character you wouldn’t expect at all, changing their lives drastically, especially for Lucy.

The question right now with the series coming to an end is: should you watch the show? I’ll say yes, and Season 1 is pretty strong, but only watch it if you have patience for building up the pace and characters. Season 2 will reward you in terms of its 3 main characters, while Season 3 (the season I enjoyed the most) brings out one of the best television villains of the current decade and Season 4 gives two black characters a very strong spotlight. There’s always something different every season, I can guarantee you that.