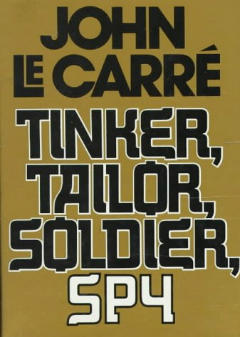 Who is the Soviet mole at the top level of British intelligence?

Office politics and a shooting in Czechoslovakia bring about a change in leadership at the Circus (MI6,  British foreign intelligence).  Six months later, one of the men forced to retire during that upheaval is presented with shocking information: there is a mole in Circus command. This man, George Smiley, must investigate both allies and enemies in order to discover the traitor.

The low-key yet complicated prose and abundant spy jargon [Wikipedia] may turn away casual readers in the first fifty pages. However, the characters are distinct and fascinating enough to carry one to a point when the plot gains momentum.  The humanity of these characters is present but must be pieced together from trickles of details — social status, type of dress, interests, idiosyncrasies, methods, tics, reactions, old jokes, etc. Protagonist George Smiley is described by some reviewers as the “anti-James Bond.” He is a quiet and pudgy middle-aged man whom no one would suspect of being a brilliant spy. All of the characters have fallen into miserable routines within a dreary existence, with some making desperate attempts at trust and enjoyment. Professional paranoia invades their personal lives, such as when the character Peter Guillam thinks himself into a worry spiral about the age and marital status of his girlfriend.

Long flashbacks and spoken recollections reveal much of the information about characters and plot. This technique may not provide constant thrills, but it works with the dry technical prose to immerse readers in the cautious and calculating spy mindset. Some of these sub-stories stand as engaging, exciting episodes of danger and romantic intrigue. This novel, though, is a bleak tale of disillusionment, where survivors of betrayal soldier on with wistful memories and never-ending suspicion.

The 1979 TV adaptation starred Alec Guiness as George Smiley. I watched the DVD set of the six-episode compressed version that aired in the US — the original is seven episodes total, but I didn’t notice anything lacking until I checked both IMDb and Wikipedia.  Like the novel, it requires some patience to get through long drops of exposition. Yet the series as a whole is a solid production worth watching, with particularly great acting, cinematography, and soundtrack.

A film version of Tinker, Tailor, Soldier, Spy will be released in theaters late 2011, with Gary Oldman as George Smiley. The cast is filled with excellent choices for the characters, and the source material shares the chilly atmosphere of  director Tomas Alfredson’s Let the Right One In. You can read more about the movie and view the trailer in this post.